Hello friends.  I am not going to lie, I've been postponing this blog post for a while.  I know I needed some time to take a break from the craziness and ingest the 2 most intense weeks of my life.

I have very mixed emotions about the last 2 weeks in May in Oklahoma.  Emotions including:
Sorrow - Oklahoma faced immense tragedy.  My heart aches for all the people impacted by these storms.
Helplessness - Of not being able to do more.  I am struggling with the thought that I watched tornadoes killing people.
Anger - Towards people quick to criticize...everything.
Hope - For rebuilding and for change. New tornado regulations and requirement of storm shelters, especially in schools.
Excitement - From running on adrenaline for 2 weeks straight.  The May 19 Shawnee tornado was the closest I had ever been to a violent tornado.  Next, I witnessed the horrific and deadly Moore EF-5.  Finally, I got too close to the widest tornado on record.

I wonder, why did God put me here in this space and time to witness such historic and catastrophic times? I know it can't be a coincidence.  I do know that I was meant to be here for a reason...but that reason remains unknown.  I'd like to think that part of the reason is to help keep Oklahomans safe.  I pray that I can join in the catalyst for change in tornado safety precautions to save more lives in the future when inevitably more violent tornadoes strike.
May 31, 2013

May 31st was like deja vu.  Once Oklahoma faced a 3-day streak of severe weather.  May 18-20 proved deadliest on day 3 and it happened again May 29-31.  Thankfully, this tornado did not hit a majorly populated city, however, 21 lives were still lost mainly due to serious flash flooding.

As meteorologists we use several forecast tools to predict the potential severity of the weather.  One of the indices is the "Significant Tornado Parameter."  I won't go into nerdy detail but basically, I have never seen this index so high before.  As you can see, there is a bullseye with 11.  Just as a comparison, I saw the number as high as 8 for the Moore tornado day.  In other words, meteorologists across the state knew just how bad May 31st could be.  For this reason the SPC issued a moderate risk and a PDS (Particularly Dangerous Situation) Tornado Watch.  I commend the National Weather Service in Norman for putting out urgent wording and stressing tornado safety in advance of storm development.

In a way, I would argue May 31st to be more dangerous than May 20th.  I am not diminishing the fact that the Newcastle/Moore tornado was a tragedy. Hands down, it was a horrific tragedy.  However, May 31 impacted a greater area, the storms were making erratic movements and it seemed like nearly every storm was turning tornadic.  When I was on the Mizzou Storm Chase team, we would not chase high risk days for this reason.  The storms were highly dangerous to chase.

Storm Chasing in Question With the Loss of A Legend

Many people have asked why storm chase?  Storm chasing is necessary to provide "ground truth." Radar can only give us so much information.  Storm chasers can tell whether or not there is a tornado on the ground and if it is causing damage, the tornado's exact location and the tornado's intensity.  Select storm chasers further tornado research. I am not about to jump into a hot controversy but I do agree that discussions need to be made about storm chasing safety.  You are probably thinking...who are you, Emily, to be talking about this since you were so close to the El Reno tornado?  That is valid.  However, before you judge I would like to clarify that photojournalist Kevin Josefy and I worked hard to make sure we had a safe distance from the tornado and had appropriate escape routes. If you watched our raw video from the day, you can hear us discussing several ways to get out of the way should the tornado change directions.

Not only did the tornado change directions but it did it quickly and jumped in intensity.  According to OU mobile radar data, the tornado went from a 1 mile wide to 2.6 mile wide (new record) tornado in a matter of 30 seconds.  Unfortunately, this drastic change caused the deaths of Tim Samaras, his son Paul and colleague Carl Young.  The news of their deaths was a complete shock.  A shock personally and a shock to the entire meteorological community.  I had the honor of meeting Tim Samaras in college while attending the National Storm Chaser's Convention.  Tim is no ordinary storm chaser, he is a pioneer in the field.  On June 24, 2003 Tim Samaras and his team successfully placed one of his "Turtle Probes" (see pic) successfully in front of an F4 tornado in Manchester, Tornado.  The probe captured a 100 mb pressure drop in 10 seconds...the lowest pressure drop ever recorded.  He also placed a "Turtle Probe" with 360 degree camera angles and showed it for the first time at the chaser convention I attended.  You could hear a pin drop as all of us storm nuts watched in awe.  My thoughts and prayers go out to the Samaras and Young families and friends.

The fact that Tim died really shook me to the core.  His death reminds us that storm chasing is inherently dangerous and there is an element of unpredictability with tornadoes.  It made me realize how blessed I was to still be alive after my close call on May 31st.

A big thank you to my dear college friend and storm chase buddy, Willie Gilmore, for taking the time to analyze Kevin & my location in respect to the tornado's location.  Willie works for the National Weather Service in Little Rock, Arkansas and has access to archived radar data.  If you watch the video I posted above, this is the location when we are backing up and our back window gets blown out.  I had a visual of the tornado to my southeast and then it turns and crosses in front of us.  This is when the tornado intensified.  Tim Samaras' vehicle was found 2 miles down the road we were backing up on. 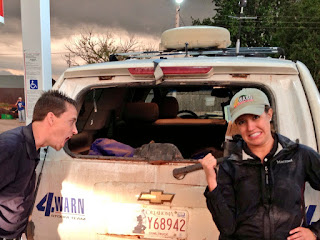 Was I in the tornado? NO.  Was I too close? Yup.
The winds were likely caused from either an enhanced Rear Flank Downdraft (RFD) or strong inflow jet.  But if you think about basic physics, a low pressure center that causes a tornado to increase from a mile wide to 2.6 miles wide in 30 seconds is going to trigger a strong influx wind.  The combo of the deepening low pressure center and drastic change in direction whipped the wind around and blew out our back window.  While backing up I lightly hit the guard rail (oops) and it knocked down our dash cam.  The combo of confusion about us being in the tornado and the camera going black made it seem like we died.  This video clip broadcast nationally on CNN, The Weather Channel and MSNBC and freaked out my friends and family in Chicago and Oklahoma.  We were OKAY! But thank you for the concern.

Thank God storm season is over.  But until next spring many discussions need to be made.  My personal opinion is that everyone should have a certified storm shelter.  It can cost thousands of dollars but can you really put a price tag on your and your family's lives?  Perhaps neighbors can split the cost and share a storm shelter.  Regardless, we all need to have safety plans in place because another violent tornado will hit Oklahoma.  I hope government officials can work together to put shelters in schools.  It's about time.

In response to negative press about my station, all I can say is that I support the 4Warn Storm team and I want to stress that it is our goal to SAVE LIVES.  No we are not trying to freak people out or get the best video...it's all about SAVING LIVES. That's it. 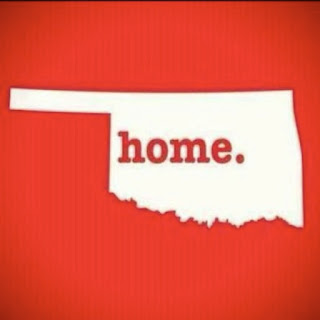 On a positive note, I am amazed by the spirit of Oklahoma.  I consider myself an Oklahoman now and couldn't be prouder of the attitude and giving nature of this state.  I tell friends from Chicago how amazing it is after such a tragic time that storm survivors give ME a hug to thank me for storm coverage.  I should give all the storm survivors a hug for being so strong.  The sense of hope and resiliency from tornado victims is inspiring. Thank you to everyone that has donated time and or money to the clean up efforts.  There will be many months of clean up ahead and we have to stay strong.  Oklahoma strong. God bless.