So my last post's title is "Track Hell." Thankfully, going through hell and back paid off. 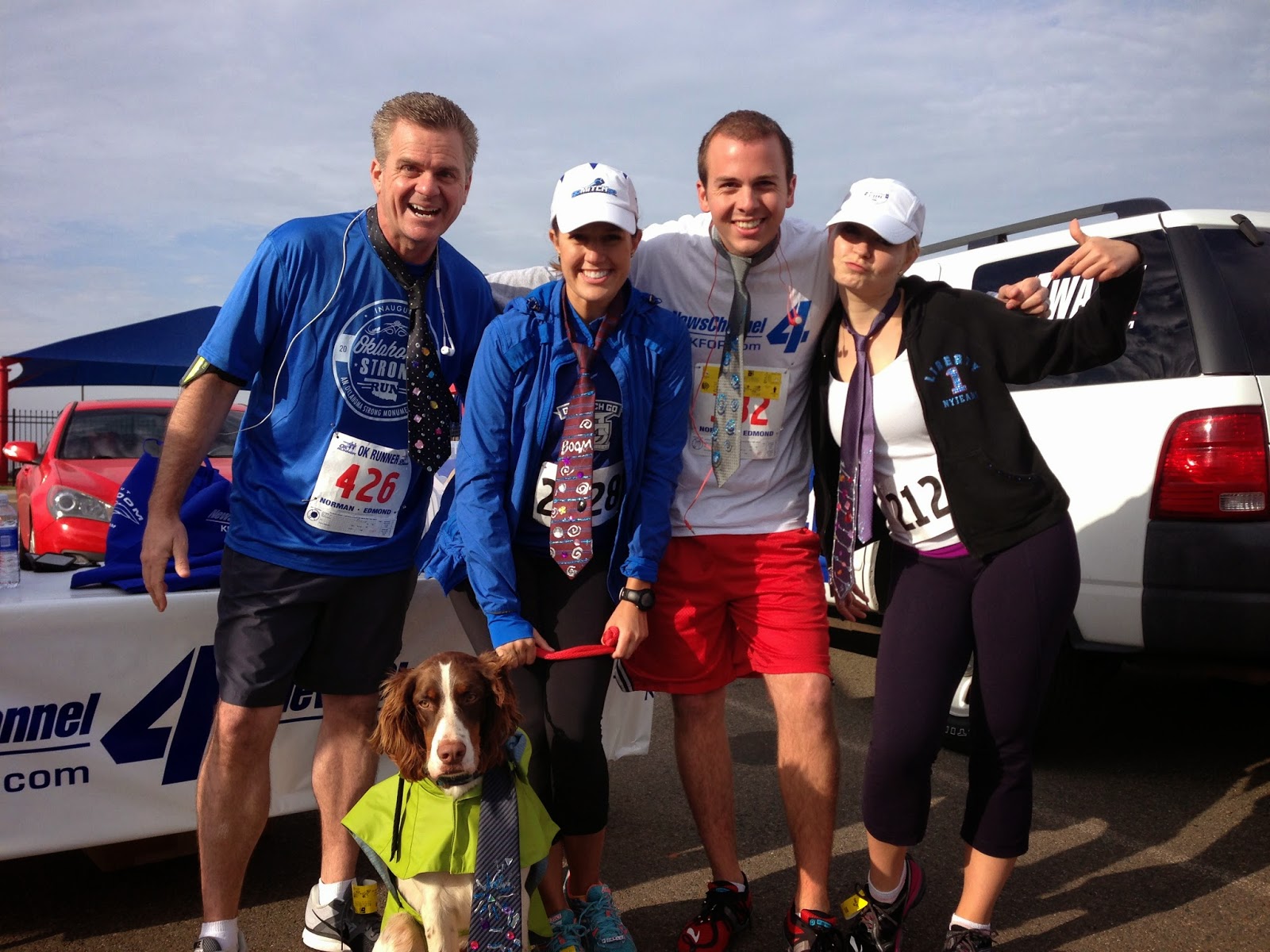 I had the honor of singing that National Anthem for the inaugural Oklahoma Strong 5k and Okie was the official mascot! The run helped raise money for the Oklahoma Strong Monument to remember lives lost in the Moore tornado last year. I figured I'd run as well especially since I've been busting my butt in track practice. 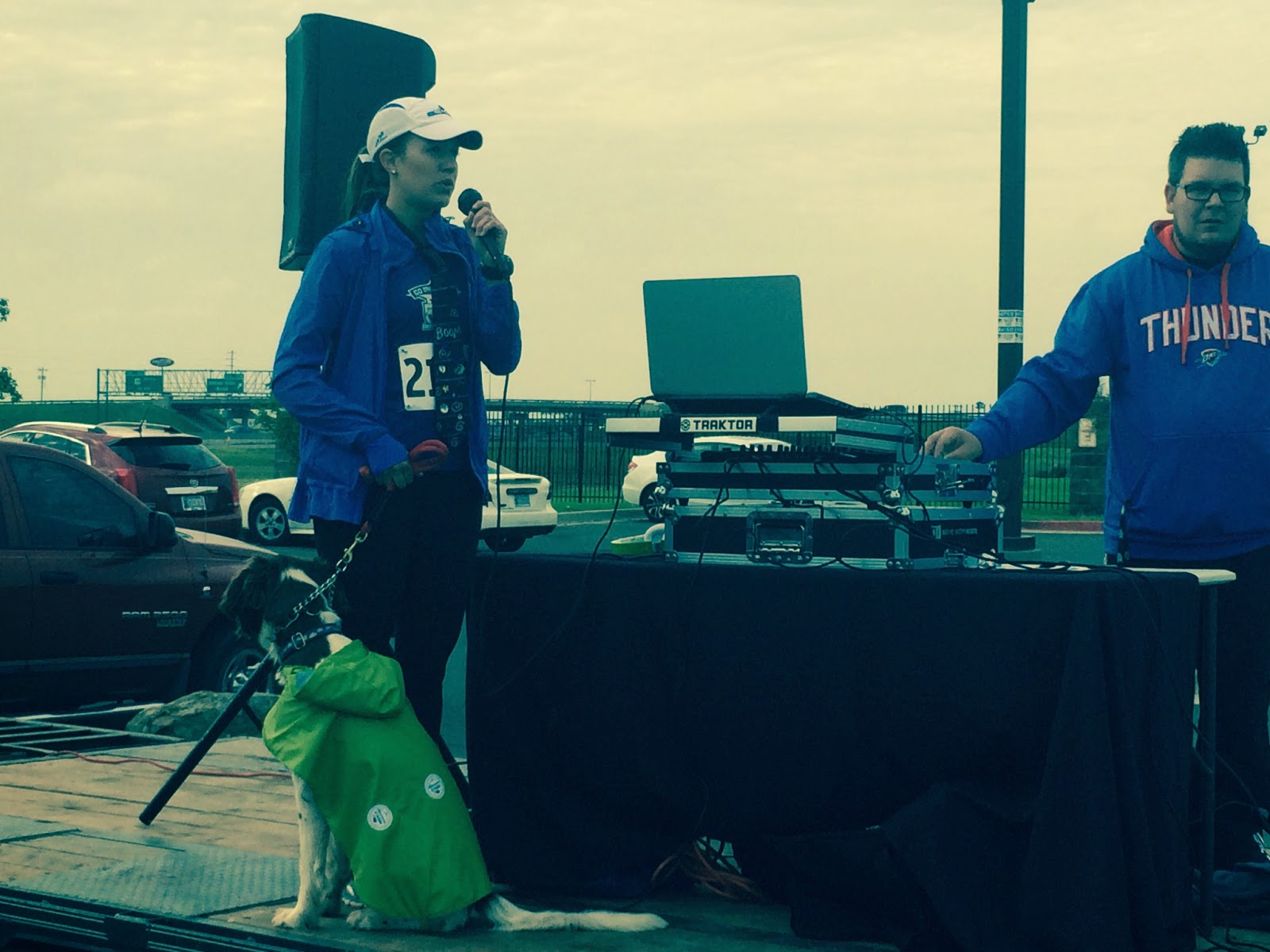 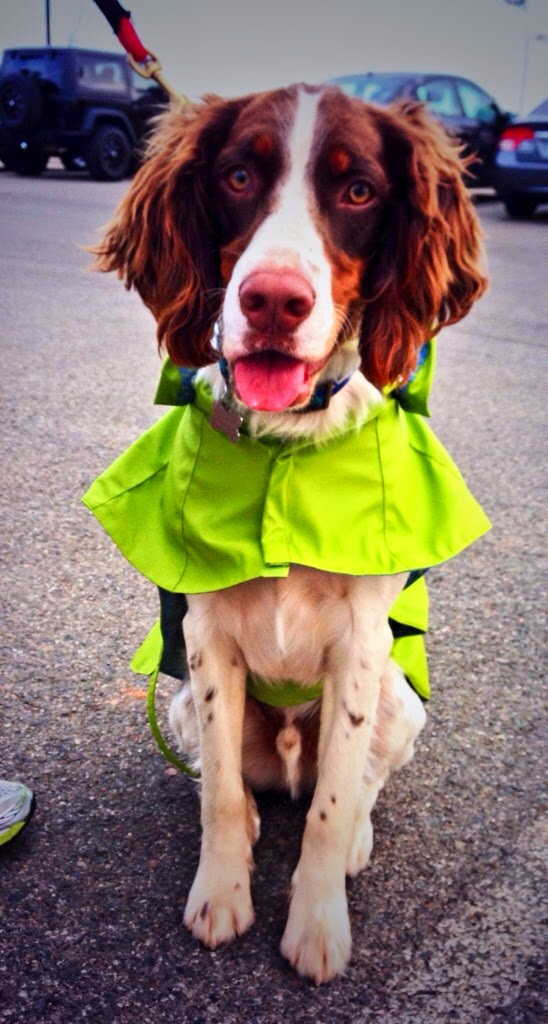 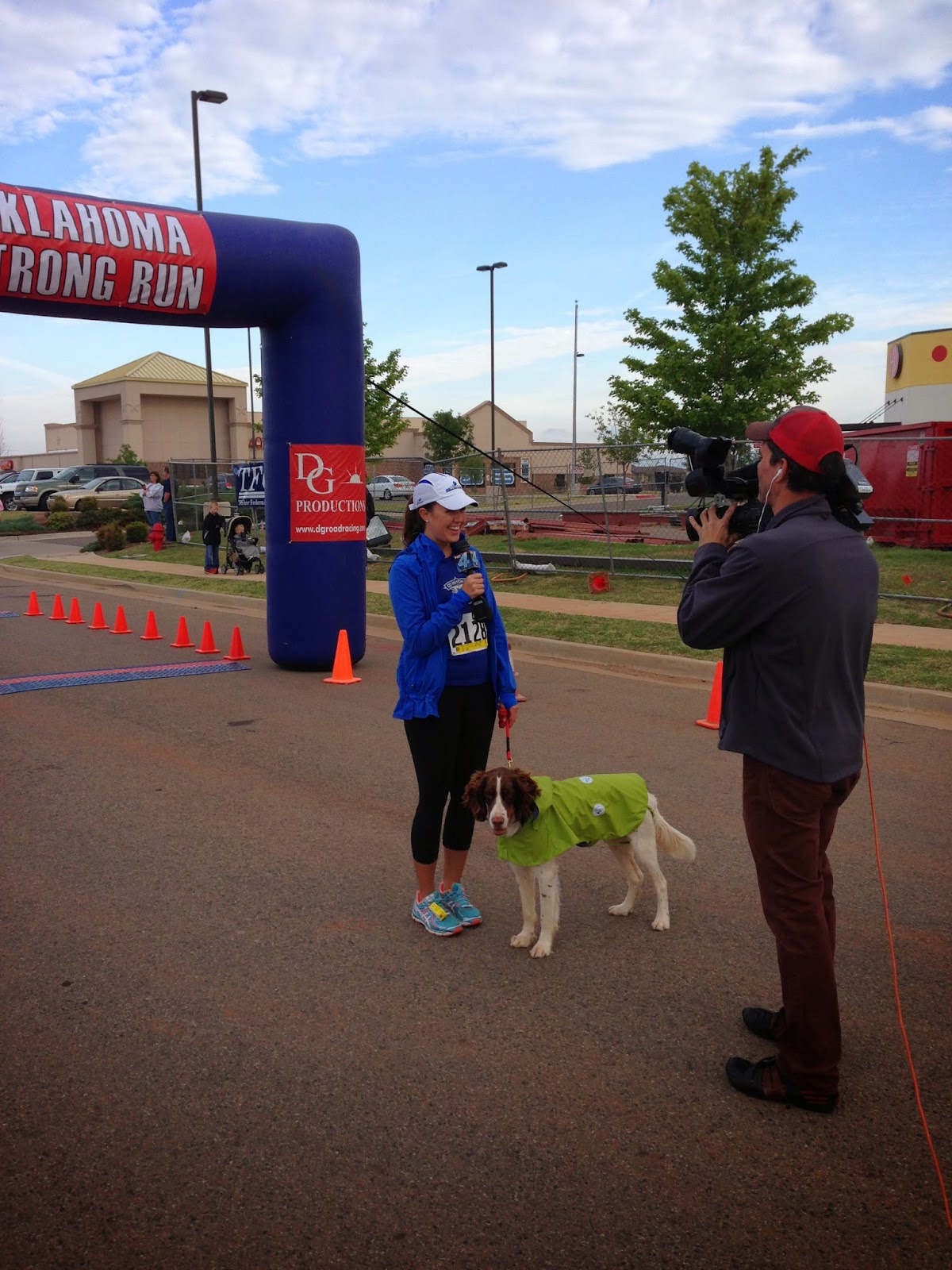 Temperatures will cool in the 50s with cloudy skies and a breezy north wind.  I decided to run without a jacket. Typically colder temps help me run and swim faster. I don't think it makes a difference with my cycling except increase my desire for sweatpants and hot chocolate.

Other channel 4 buddies joined the race as well including Lance West and Aaron Brackett. We wore the sparkly ties we were supposed to wear for the Memorial Marathon relay "Mike Morgan & The Bedazzled Ties" but the group disbanded before we ever had the chance to sport these gems! 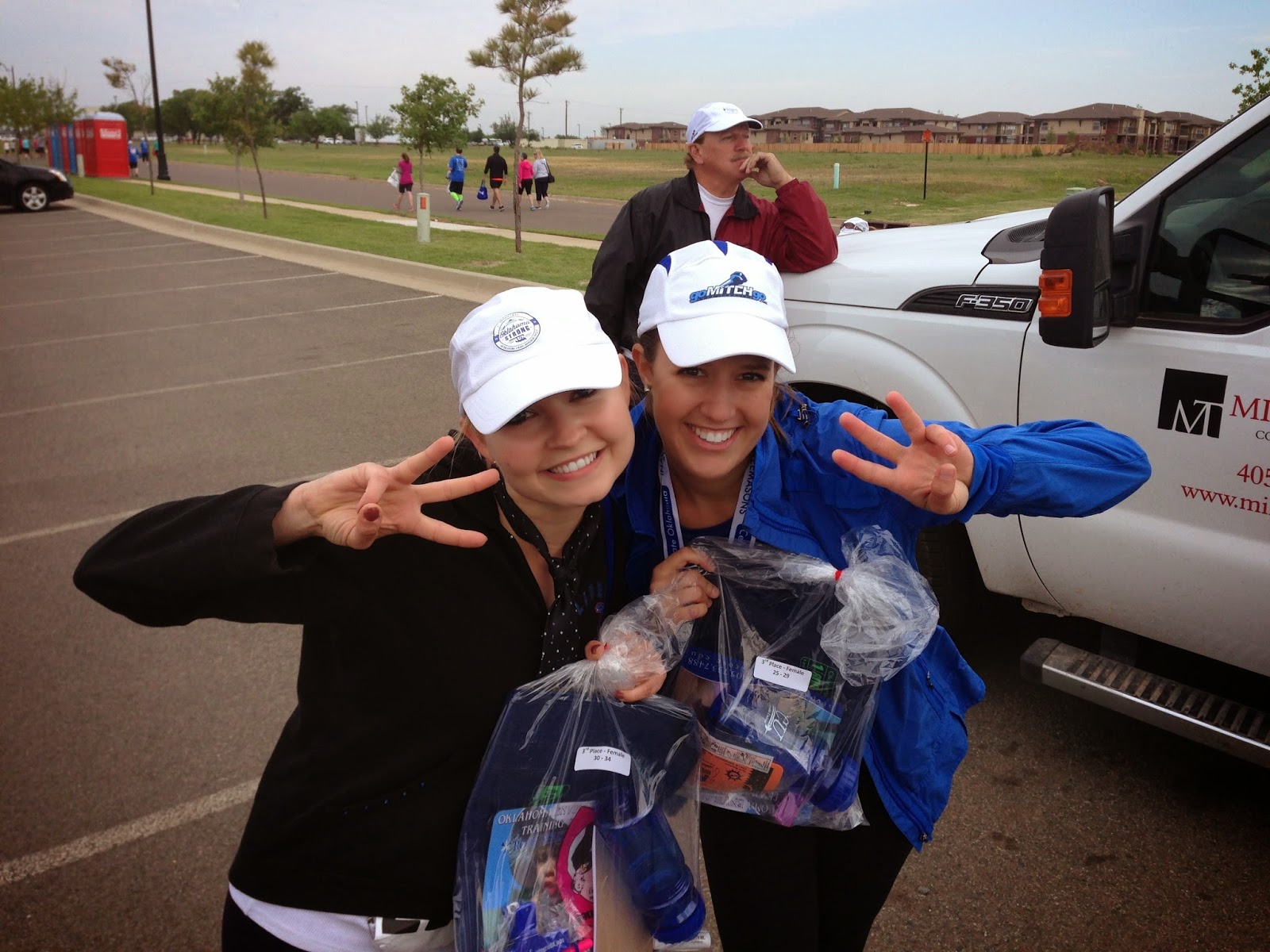 I ran with my "Rise & Shine" buddy Lacey Lett.  It turns out that we have a similar running pace and we have been running buddies ever since!  I knew the 5k would hurt...and it did.  If you are pushing yourself, it will hurt.

We started out flying with a 7:30 minute/mile pace. I knew I couldn't keep that up the whole time but I tried to stay around 8 minutes. The last half mile was brutal. Lacey dropped back a bit and I knew I had to stay strong. I just mentally repeated "strong, power, strong, power..." and that seemed to help. 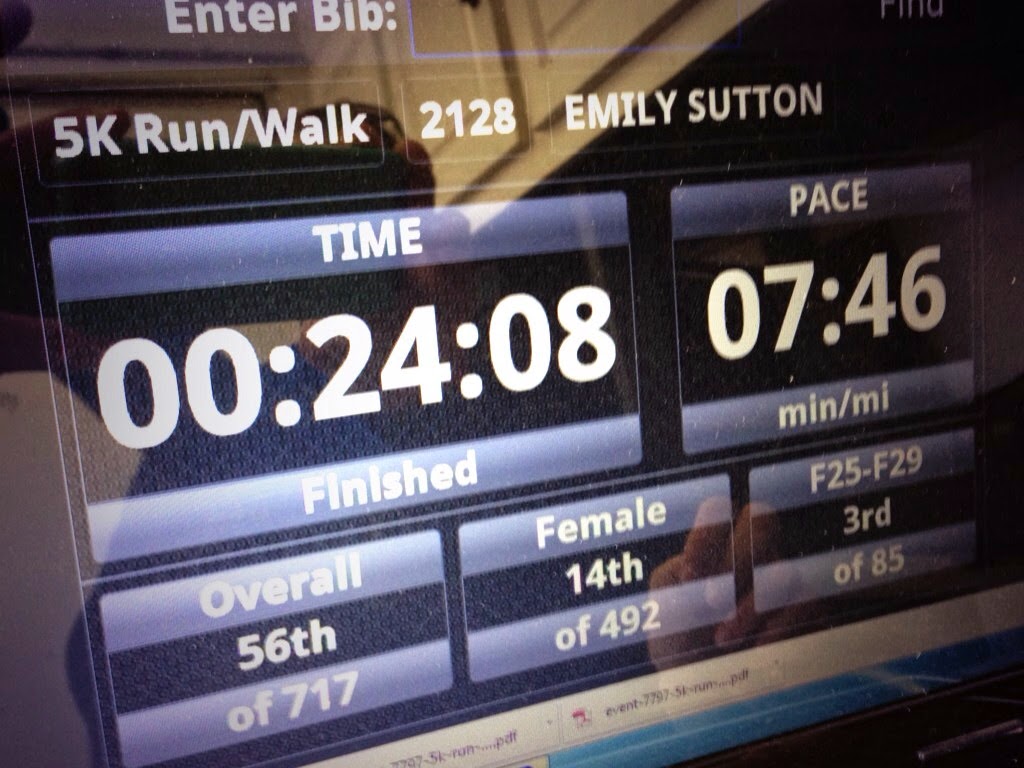 I finished with a personal record (PR)! HOORAY!

"Festivus" is the term used for CRAZIES that sign up for triathlons two days in a row. I am one of them! My goal this year is to get as much racing experience as I can. 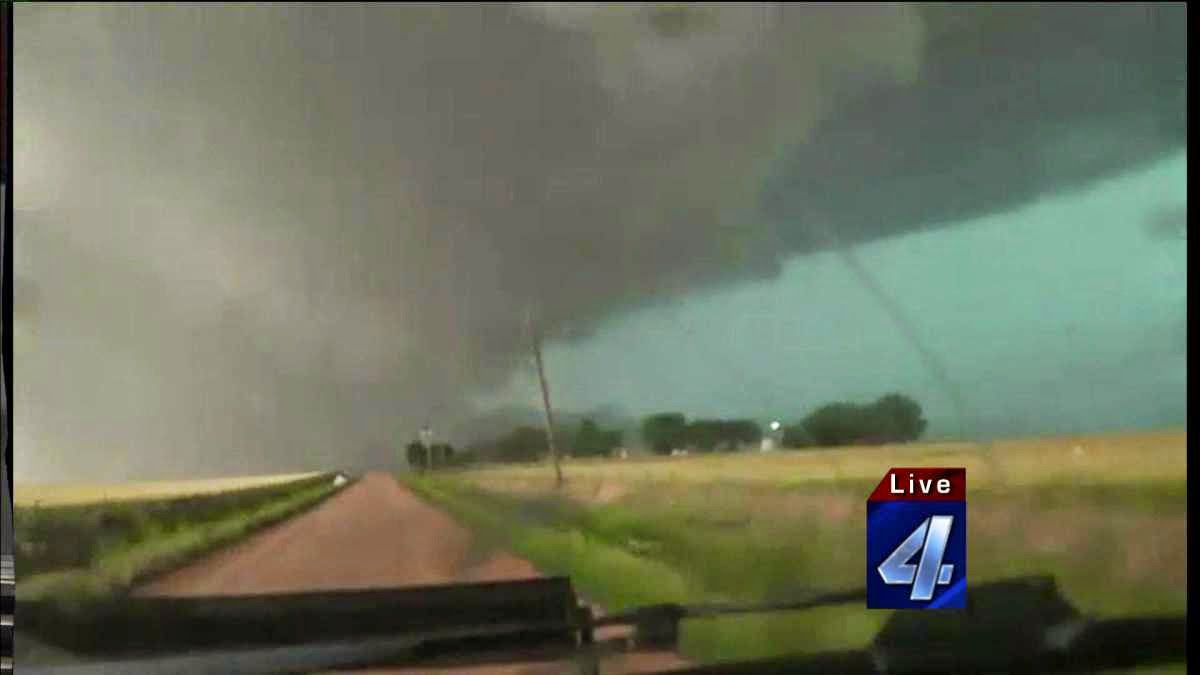 Last year the Route 66 triathlon fell on June 1.  As many of you know, the day before was a horrific weather day with the widest tornado on record hitting a few miles from the race site. It wasn't debris as much as flooding that actually washed away part of the course.  Race directors rescheduled the race for July. I was excited because there was no way I was trained for the races at the end of May so I thought I at least had time to prepare.  The first day went well but storms the second day caused the race to cancel after the swim started.  See the post earlier on the blog for more!

I was surprisingly anxious the night before about racing. My boyfriend Michael helped me put Clark Kent (my tri bike) in my trunk and I discovered I had a flat. I FREAKED OUT.  I worried I would not be able to properly change my tire. Thankfully I remembered how to do it. I hoped this would not be a sign for the weekend ahead.I realize now that I can't use the excuse of being a tri rookie. People now call me a "triathlete" or as my parents still say "runner." Ha.  I also have been working hard with training, especially running, so I wanted to do well and make my teammates and myself proud! Just as a reminder, a sprint triathlon is a 500 meter open water swim, 13 mile bike and 5k run. 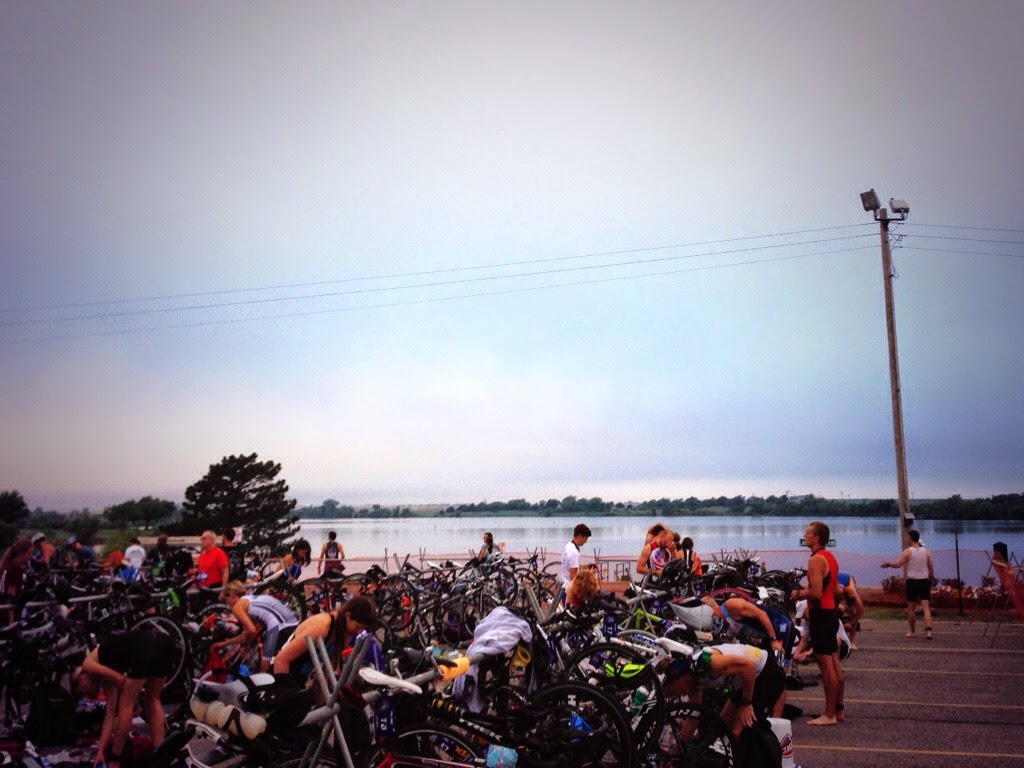 I woke up around 5am and with the exception of high humidity, I couldn't have asked for much better race weather.  Once I arrived I set up my transition and found Scott Hines. It was his first triathlon! I was nervous and excited for him. 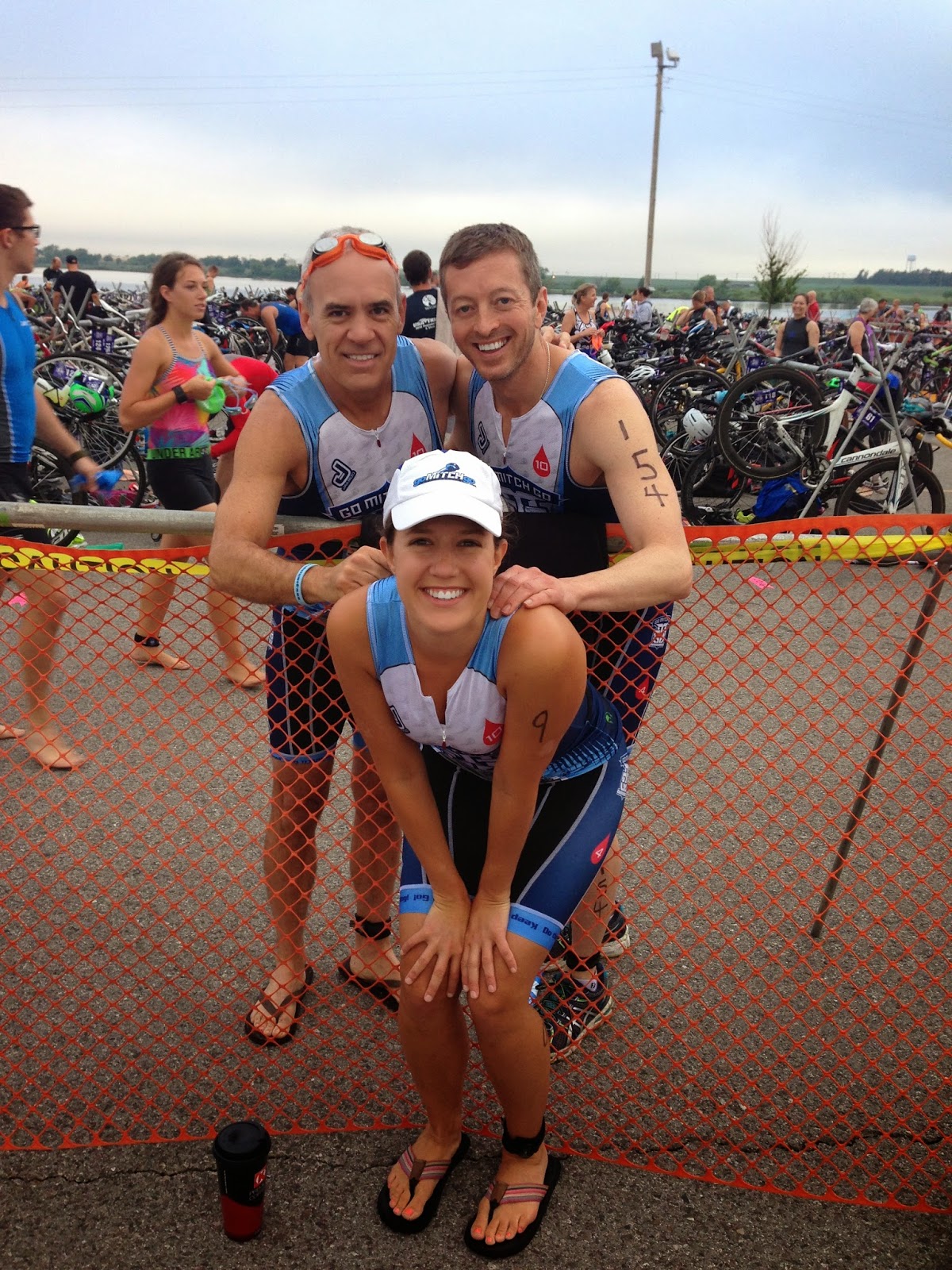 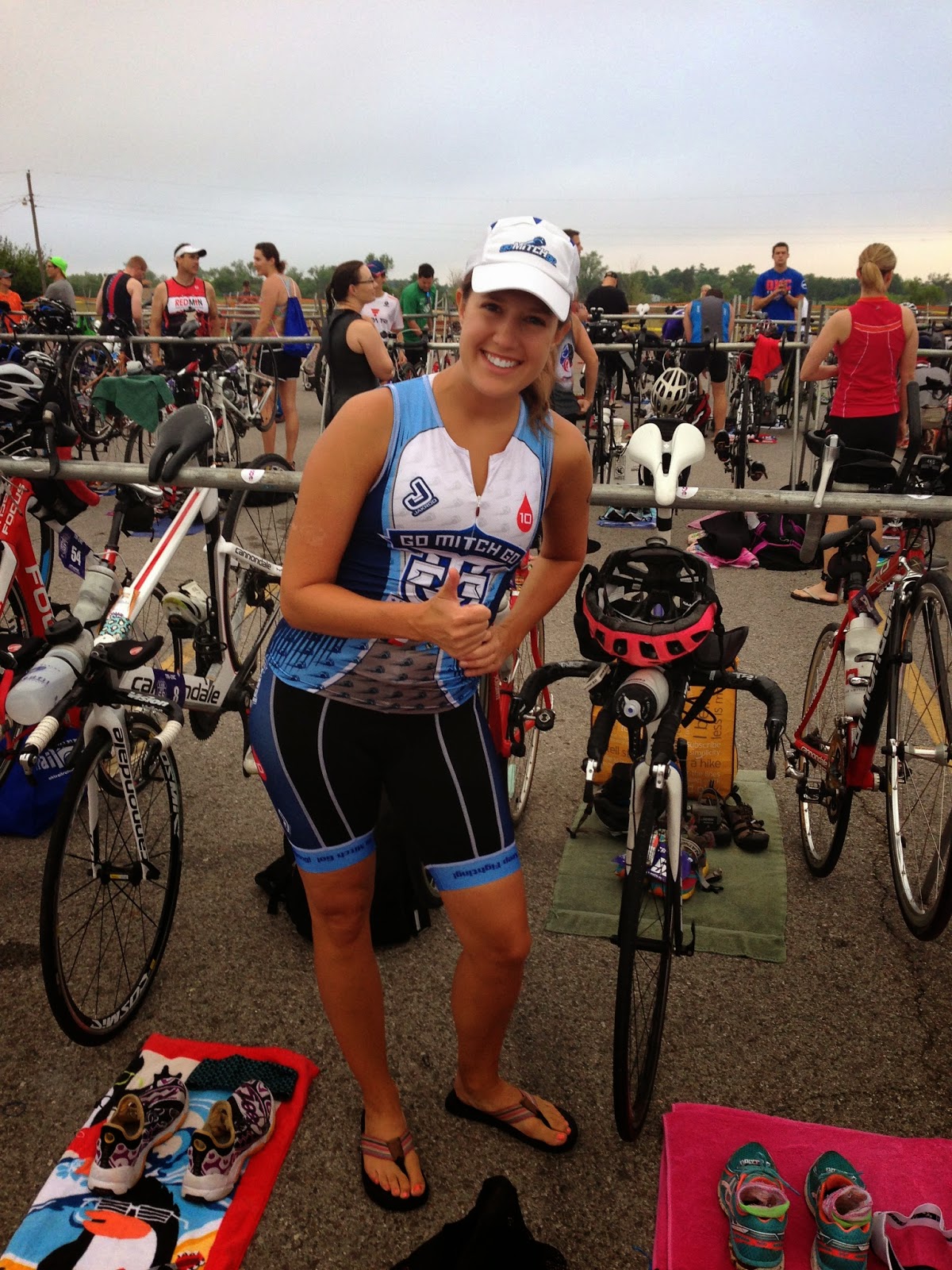 The start of the race was very casual. A little too casual. I didn't have my head in the game.  I also started in a bad place, the front inside.  I swam next to a few kids - yes kids - and a larger man. 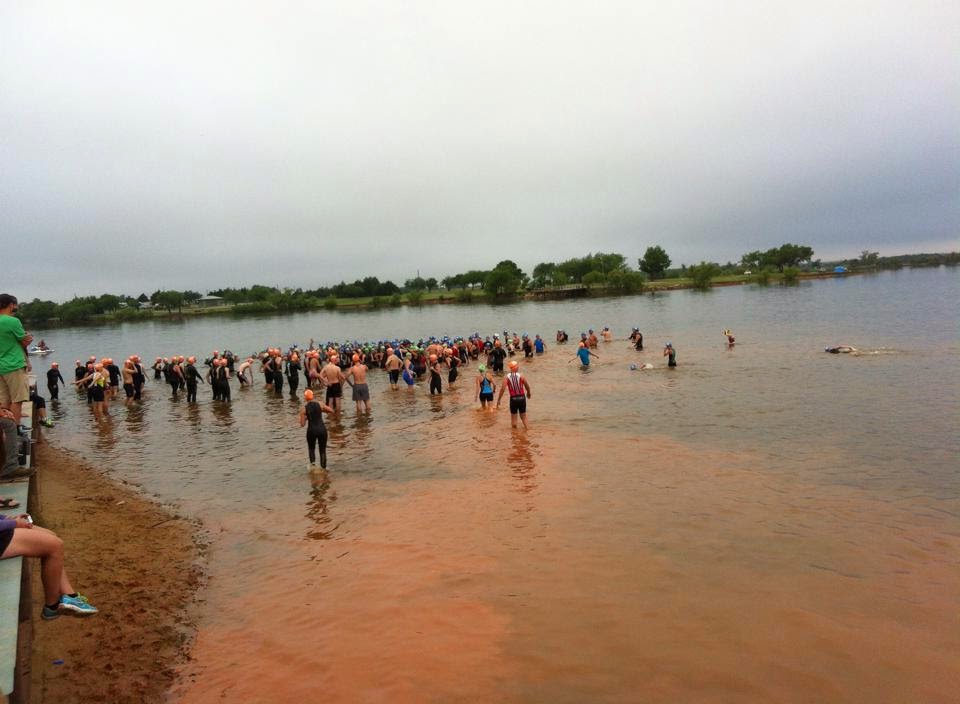 This man took me down within the first two minutes. No matter what I did I  could not swim away from him and his arm dunked me. I came up for air and said "holy $*CK." Yeah, real classy.  That was my wake up call to kick it into full gear and the rest of the swim improved. In all fairness, this was my first open water swim of the season.  Although I am completely comfortable swimming, I usually am not aggressive in this part of a triathlon. I need to work on that. 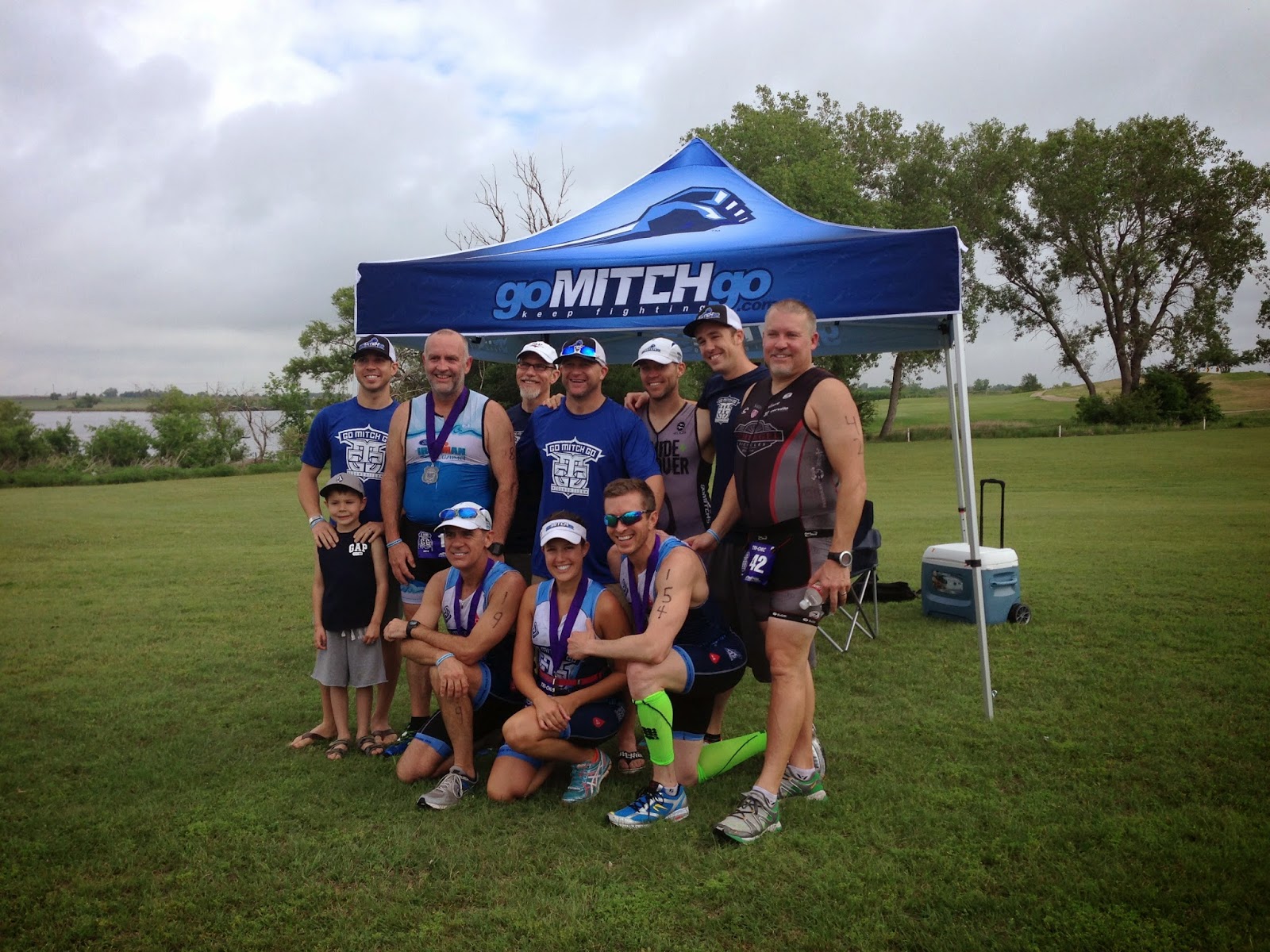 The bike ride went well. I felt strong and tried to stay around 18-20 mph. 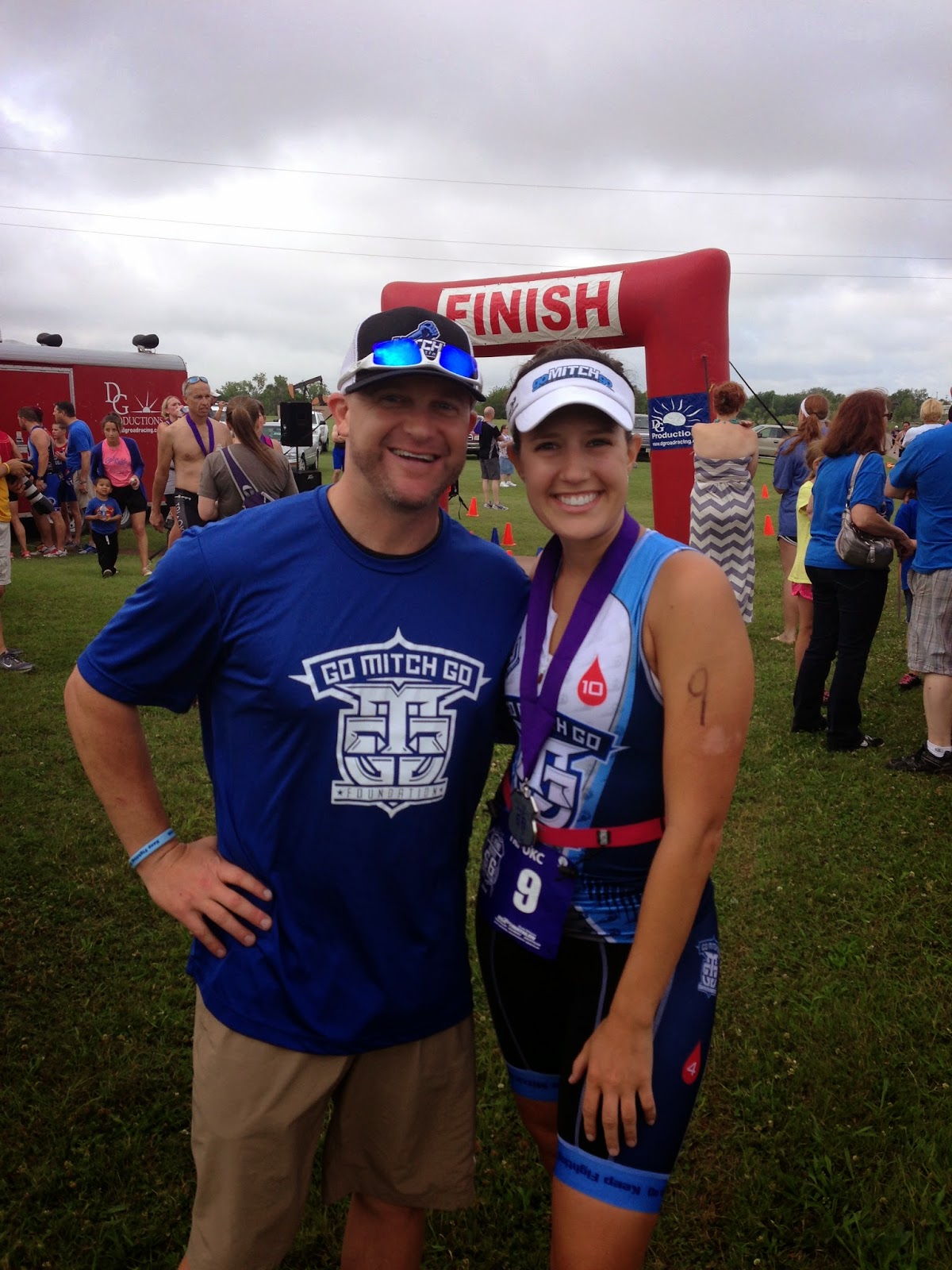 I loved hearing my GMG teammates cheer me on. It was very encouraging for the run! Like I mentioned in the 5k experience above, I knew the 5k would hurt. Thankfully the clouds kept the hot sun from steaming up the atmosphere. I pushed myself and pulled through a strong run. 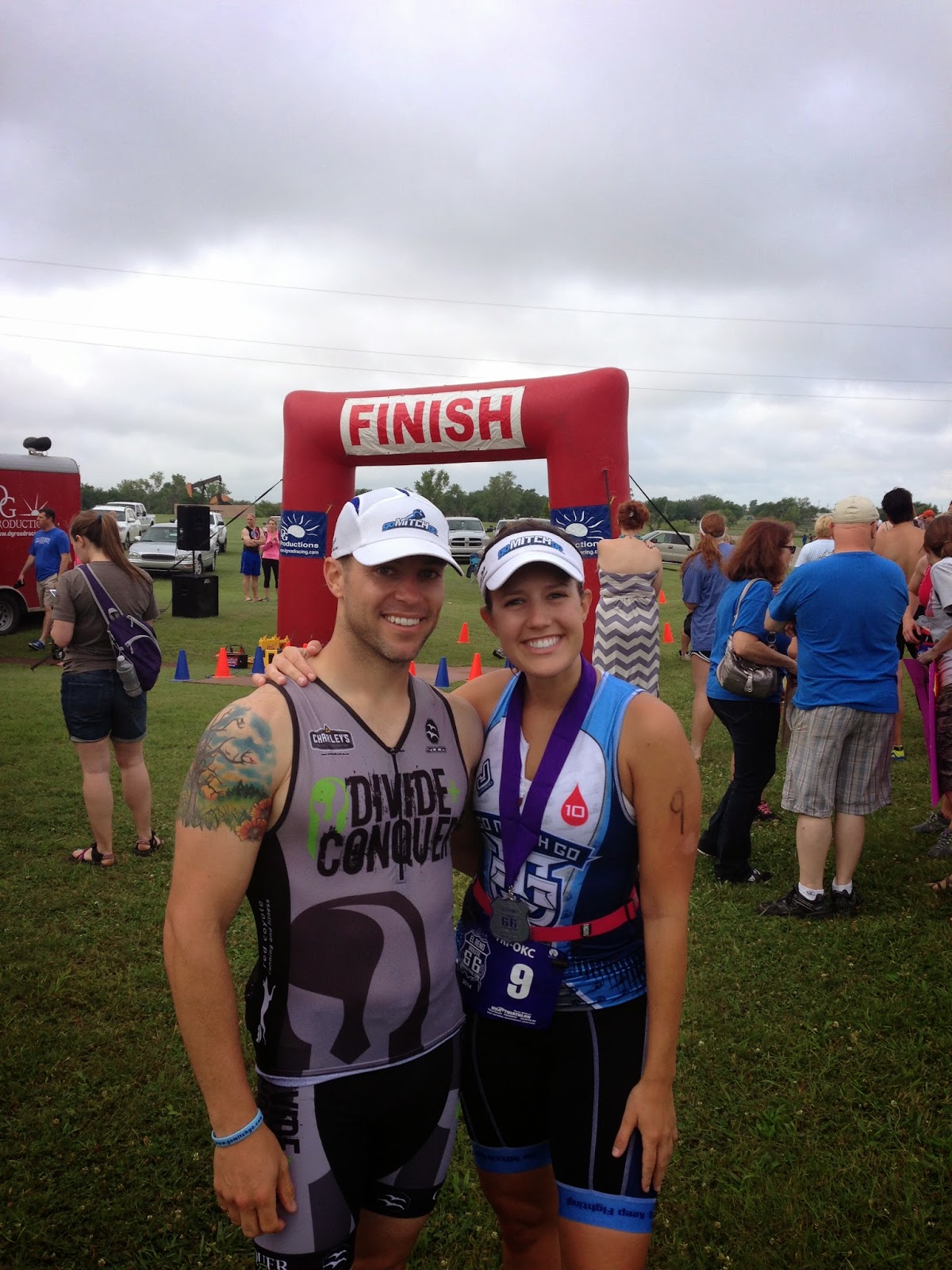 I finished the race in 1:16. Okay, I just looked at past blog posts and realized this is a PR! WOO HOO! This year I jump to a new age group...and it's harder to win. USA Triathlon uses your age on December 31st of the year...so that would make me 30...even though I am still very much so 29!!!!!! Any hoo, I was surprised that I won first in my age group! BOOM!

A big shout out to my homeboy Scott Hines. He did a fantastic job on his first triathlon! I didn't see him on the bike so I was nervous that he didn't survive the swim but then I saw his smiling face on the run course! 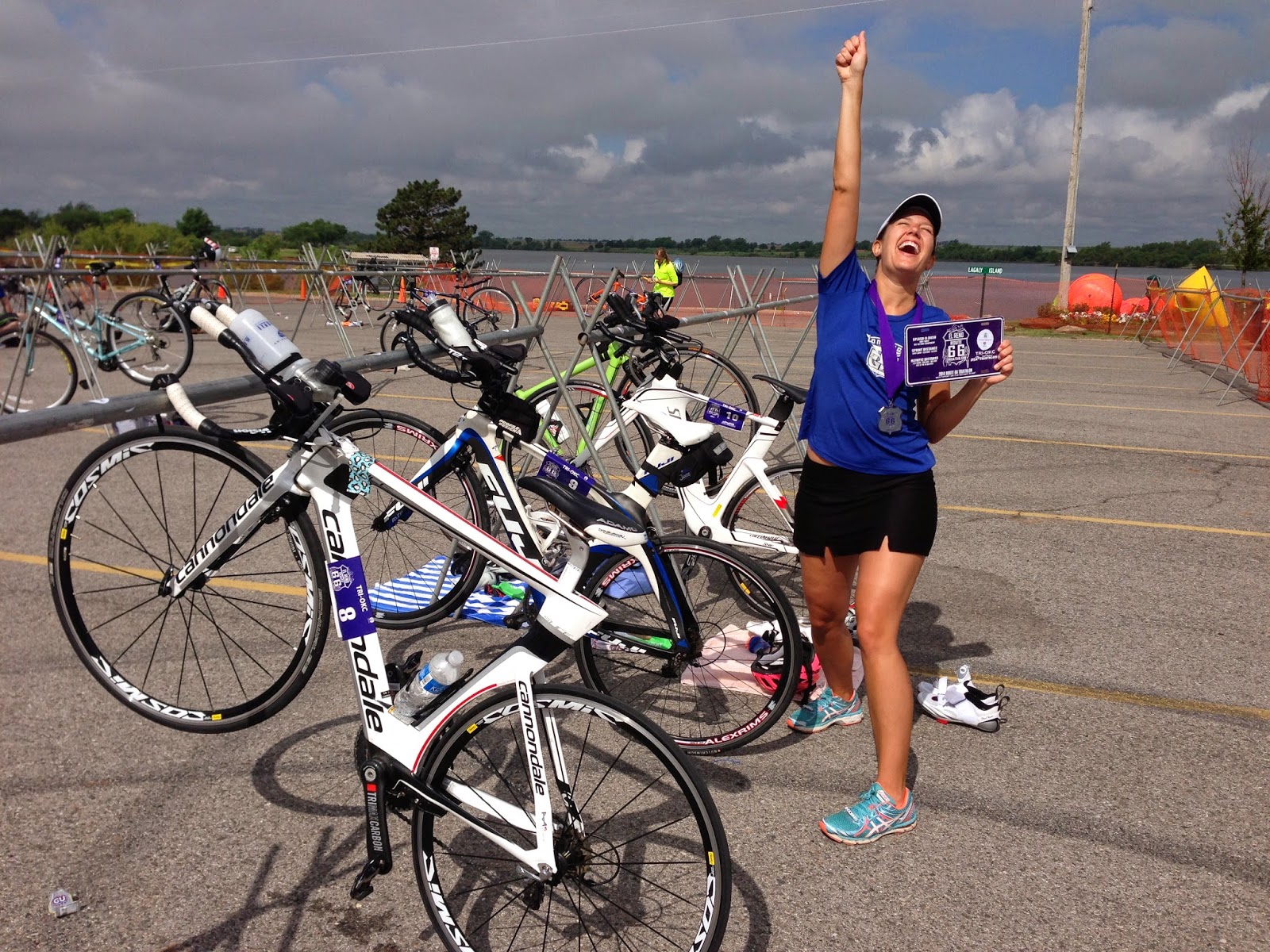 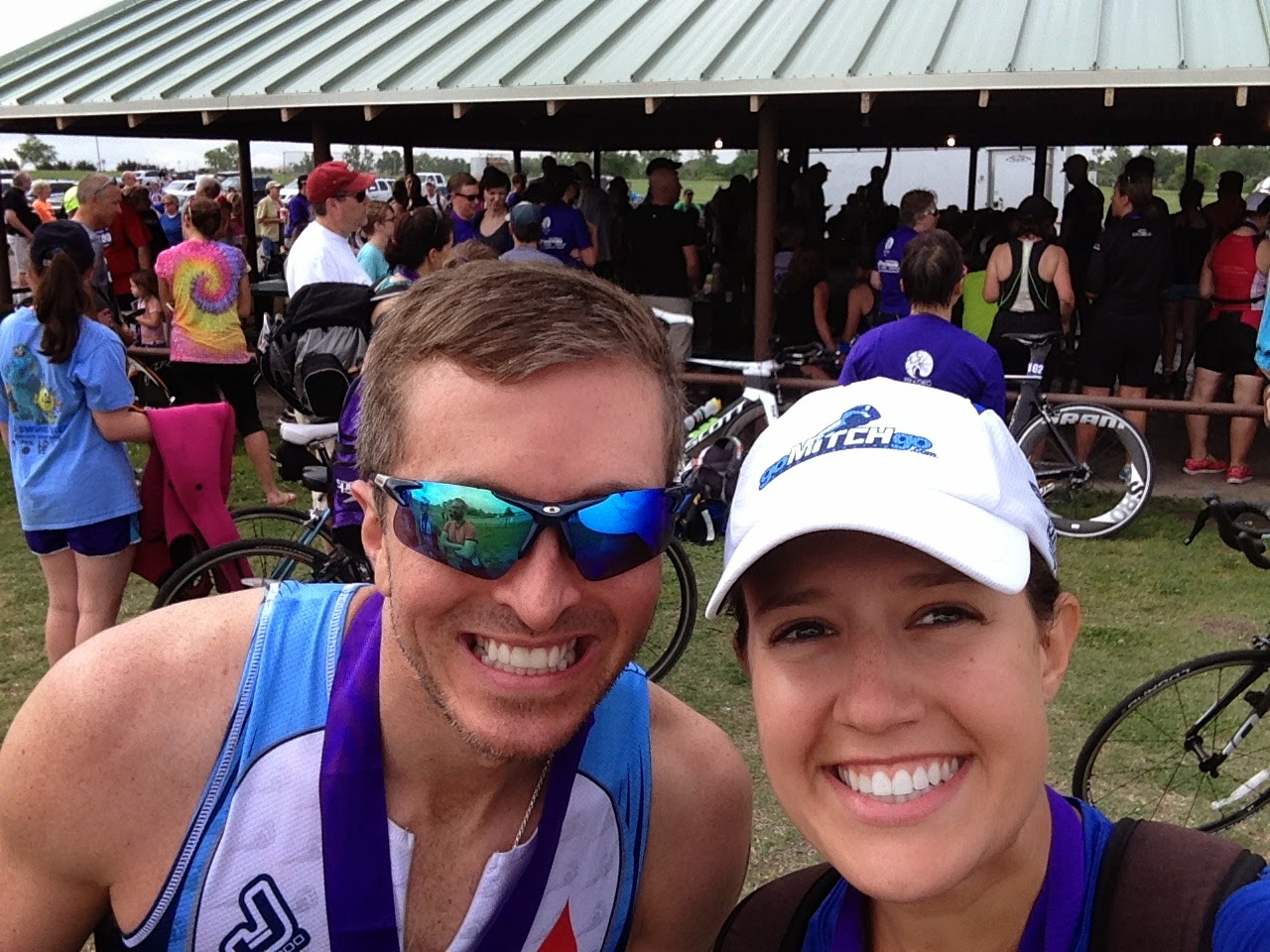 So if doing two triathlons in a row wasn't enough, I worked in between as well! What?! We are down a meteorologist right now so I had to work the evening shift. Therefore, I did not get a full night's rest before the Sunday tri. 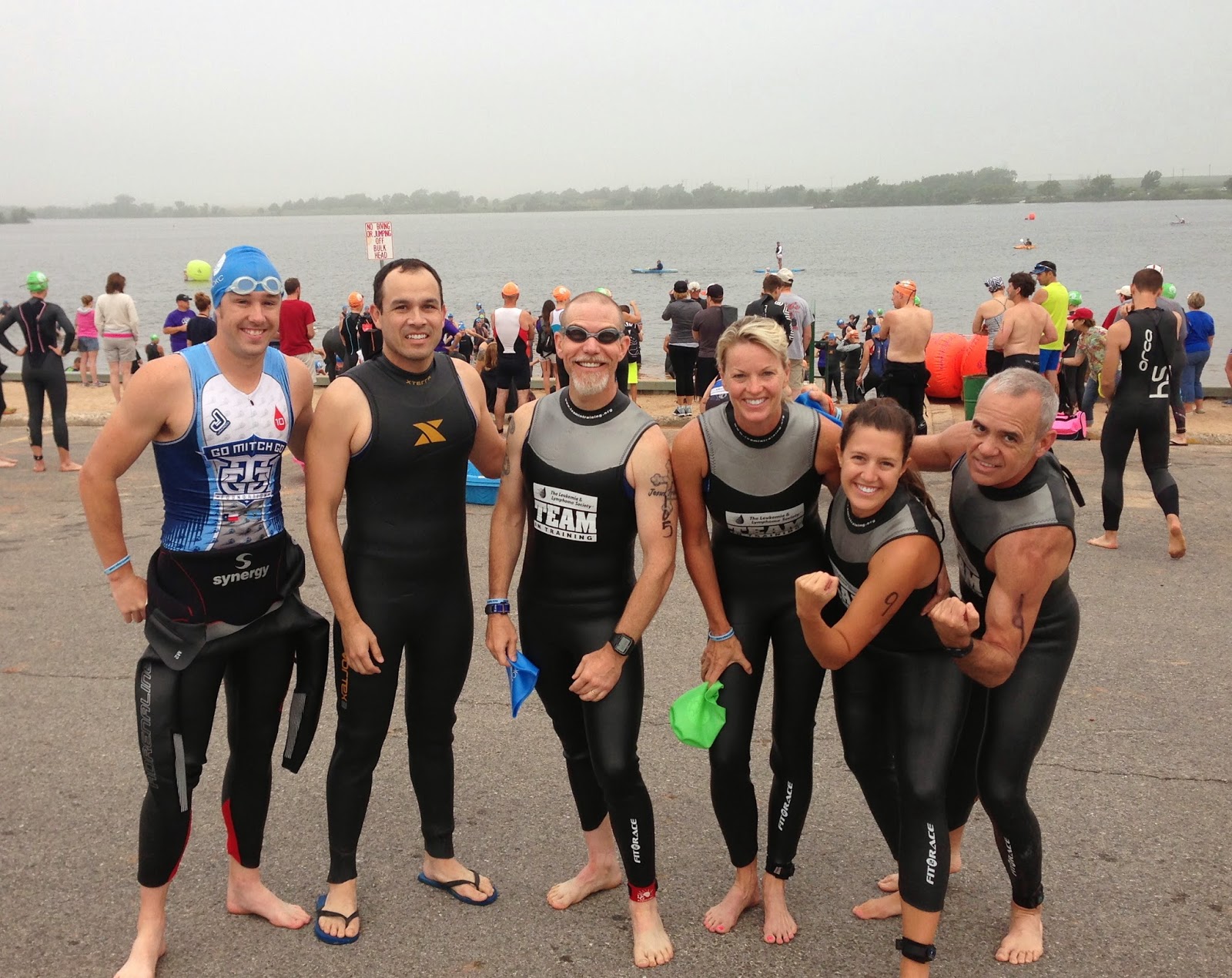 Once again, I was a little anxious about doing the triathlon.  This time it was for a different reason.... I wasn't fully confident in my training this early in the season for an olympic distance. Just a reminder, an olympic distance triathlon is a 1 mile swim, 26 mile bike and 6.2 mile run. 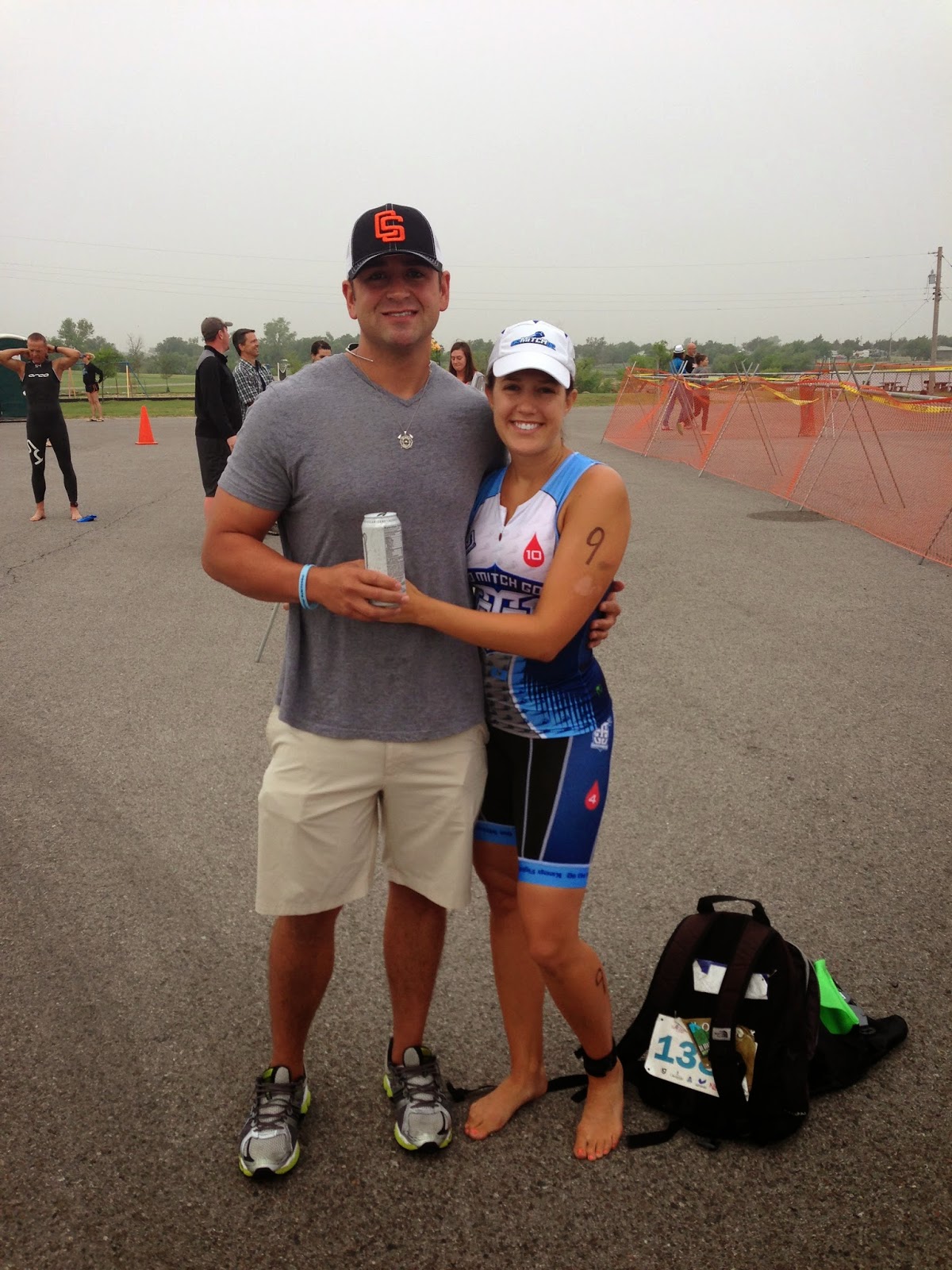 This time my boyfriend was there for moral support at the start! I also had several teammates to race with.  After the previous day's dunking during the swim I knew I had to have my game face on before hitting the water.  This time I went on the left/outer side of the swimmers. The wind was a bit higher so we had to deal with waves for part of the course.  I definitely got into a groove on the second lap. I just remember thinking, MAN - this is long. What did I get myself in to? 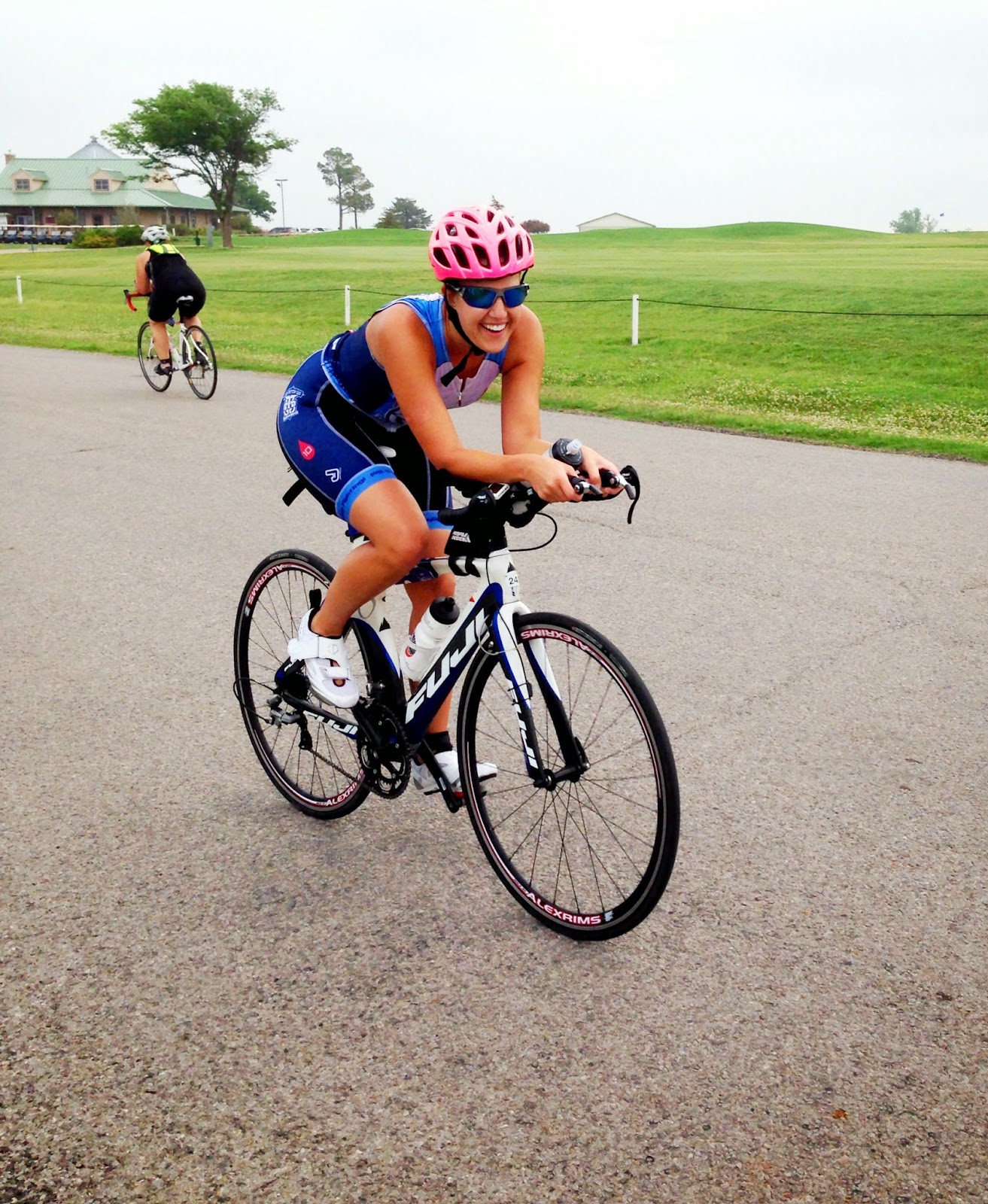 As soon as I hit the bike course I could tell my legs were fatigued from the day before. The bike involves two loops around El Reno.  This allows me to see who is in front of me and who is behind me.  My training buddy Jolynn caught up with me on the second loop of the bike.  For some reason this shifted my attitude from negative to positive.  I just thought how blessed I am to even be able to do this and how many people physically cannot swim bike and/or run. Knowing this was more of a training session than a race, I kept a steady pace around 16 mph. I The wind picked up by the end of the race and that final hill to the transition was definitely at a snail's pace. 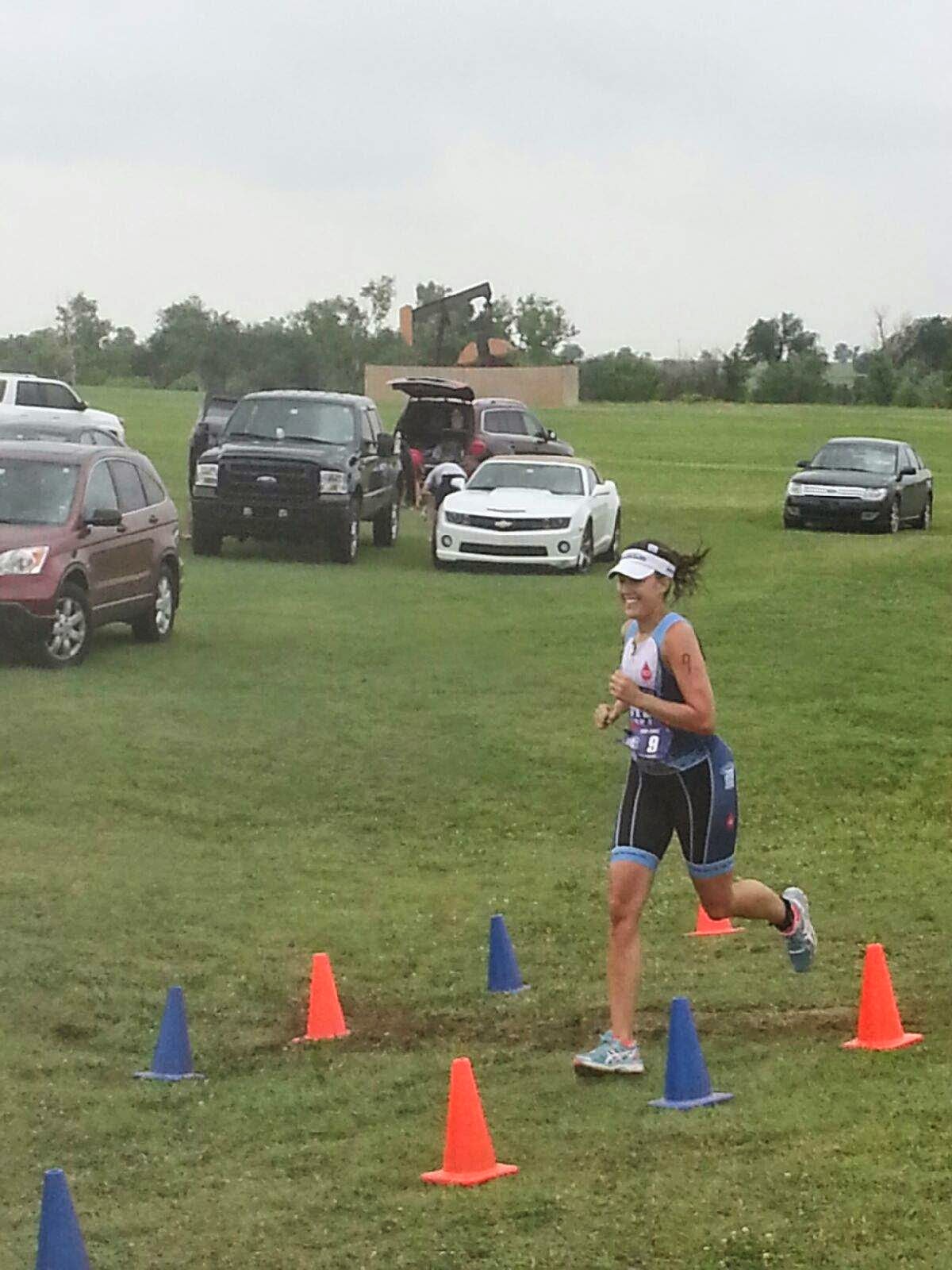 I did not look forward to the run.  Running is my least favorite part of a triathlon any way and I wasn't sure if my endurance was high enough to run 6.2 miles well after the swim and bike.  However, I felt blessed. I kept my pace a little bit back from the day before and tried to just enjoy the journey.  That's all I could do. All of a sudden I just felt completely blessed. I felt blessed to be physically able to run or do a triathlon. I thought of my aunt with leukemia. She can no longer run. Mitchell Whitaker loved to run, but he passed away from leukemia. I will run for the people who can't.  I smiled and cheered on other runners. I can't tell you how many times fellow athletes have encouraged me in the past.  One guy even said I was smiling too much. Who would have ever thought I would be SMILING while running?  I ended up passing a few teammates and felt strong until the end. Once again, I guess my track training is working! WOO!

I finished in a little over 3 hours...and that includes a port-a-potty stop! OH YEAH 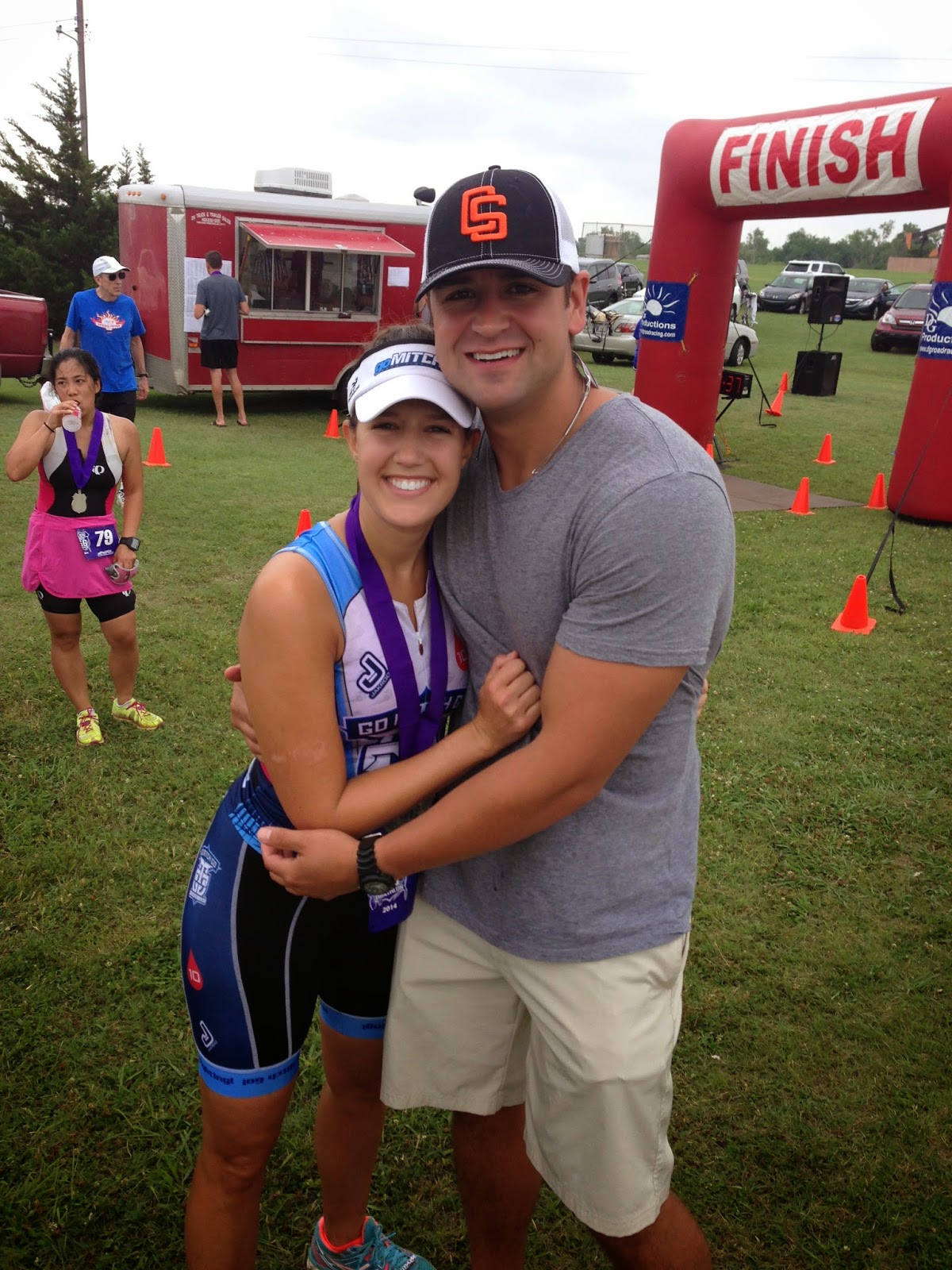 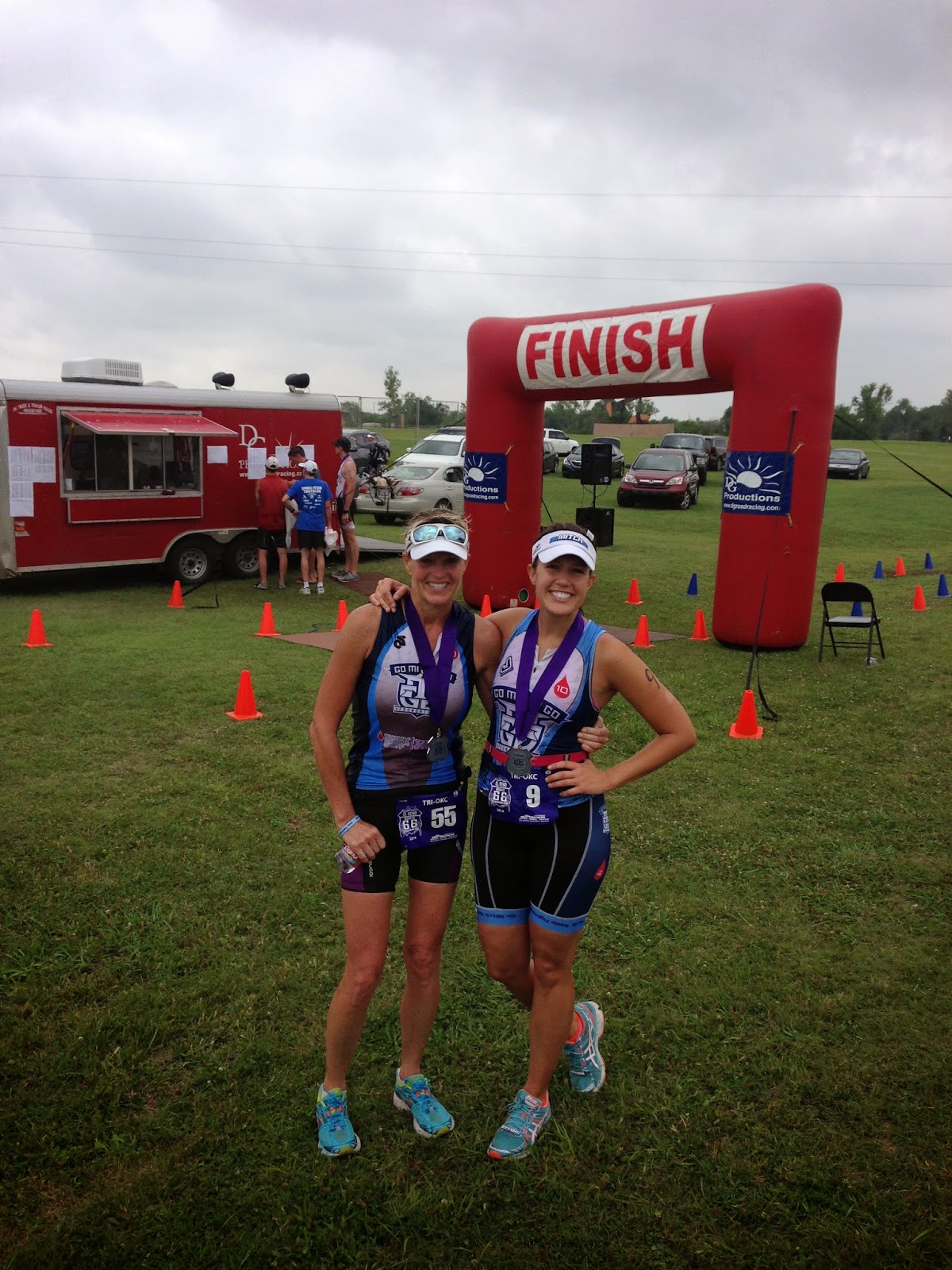 So the moral of the story is DO WORK and GET RESULTS. BOOM.

Thanks for reading friends and I will talk to you soon!  My next event is the Tour de Cure this Saturday! It's not too late to join. Just register here. I will likely be doing the 62 mile ride.

If you'd like to help...
Please donate HERE to help fight leukemia and lymphoma!
And please spread the word! Have a fantastic week!


Posted by emilyrsutton at 9:05 PM No comments: