Hello, friends! So last Saturday morning my friend Lindsey and I did the "Color Me Rad" 5K.  She isn't much of a runner so we decided to walk the course (a lot of other people did too!). 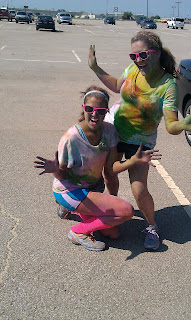 This is the first year for this event as it travels around the country.  If you've seen pictures on facebook of people wearing "running" gear and crazy tutus, bright socks and covered in paint...they likely participated in this event.  It's like the 80's vomited on a 5k!  I saw a Groupon for this event about 3 months ago and thought it sounded like fun.  I've never done a 5k by itself so I thought this would be a great one to try. 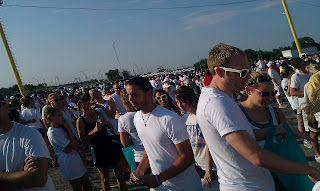 Now, I don't like being a negative Nancy but this "race" needs a LOT of work.  This race made me appreciate the proper organization of all of my other races!  Here's the concept: you wear all white and about 5 times along the course the "bomb squad" pelts you with a "color bomb" comprised of a colored cornstarch material.  It's supposed to wash out easily and not be harmful to inhale.  I really enjoyed this part and couldn't get enough color!  And I will say, it does make for sweet pictures!  At the end, it felt like a rave....or how I feel a rave would look like (never been).

Here are my issues:
1. We started around 9:30 on an Oklahoma July morning.  It should have started WAYYYY earlier.  Don't mess with Oklahoma heat!
2.  I did not see any medics along the course but DID see several people getting sick from the heat.
3.  The race took place at the fairgrounds.  The course provided little shaded areas for people to rest.
4. There was only 1 water stop and the water was HOT!
5. They needed strict "waves" of racers.  Even if I wanted to run, there's no way.  It was too crowded and HOT!
6.  I cut my had while trying to breakdance for a free trucker hat at the end (yeah, that's right), went to the "first aid" sign for a bandaid and no one was there!  I asked a man where the "first aid" tent is and he pointed to the ambulance.  For real?

In conclusion, this race needs work.  It does make for some fun pictures though!  Maybe they should do this race in the fall instead!
Thankfully all the paint washed off! I think I scared Lindsey's doggie, Maggie, though!  This may be TMI- but I blew my nose later in the day and purple came out.  No joke.

Since I didn't work out much from the "race" I decided to join a group bike ride early the next morning.    One thing I've learned about cycling groups is that they start on time!  I have a bit of trouble being on time anywhere (voted 3rd most frequently late in high school - pride point) so it was quite the feat being exactly on time.  However, by the time I got my bike out, put on my shoes and helmet, the group already left.  I pedaled to the metal and tried to catch up, but alas, I lost them in Nichols Hills. 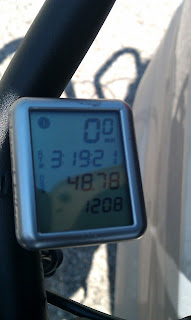 At this point I decided to do my own thing so I kept riding east on Wilshire.  I ended up traveling north through Edmond.  Don't ride your bike through central or east Edmond! Ever!  A few drivers nearly killed me!  Somehow I meandered north and then west and ended up on the Redman bike course from last year.
I ended up back at Lake Hefner around noon, exhausted mainly from the heat.  I managed to churn out a 2-3 mile run to make it a nice BRICK workout.  Whew!  What a day!

Alright, friends!  That's enough for today.  I have lots more to talk about including a new bike, new shoes, and American Idol! So stay tuned and have a great weekend!
Posted by emilyrsutton at 6:11 PM 6 comments: 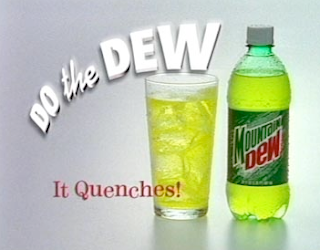 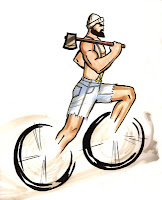 Last Sunday, July 8th, I participated in my first duathlon.  What is a duathlon?  It's where you run, bike, then run again.  It's like a triathlon except you swap out the fun part (swimming) for running.  I'm going to be honest....running is my least favorite out of the three tri practices so I was not very excited about this race.  I like to try new challenges and my friend hooked me up with a free entry so I thought, "why not?".  If anything, it would be a great practice run.

The race took place at Lake Stanley Draper.  We ran out of the marina parking lot counterclockwise around the lake and looped back to transition zone to get our bikes.  It is a 3K (1.86 mile) run.  I traded my running visor for a bike helmet, swapped my shoes, grabbed my sunglasses and headed out for the bike course. 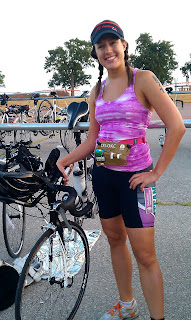 The bike course circled clockwise around Lake Stanley Draper.  I rode Draper numerous times last summer but for some reason I always went counter clockwise so this was a different adventure.  The 24K (14 mile) course started out with steep hills.  One hill kicked my butt and I slowed down to 10 mph.  I'd say I conquered the other hills fairly well.  I believe I averaged 18-20 mph.  I am noticing an improvement in my cycling.  A big difference from last year is that I can now say that I truly enjoy cycling.  A non-cyclist friend of mine says it's a "cult."  I could see that.  Looks like I'm a part of the cult!  But I won't drink kool-aid. Bad joke. 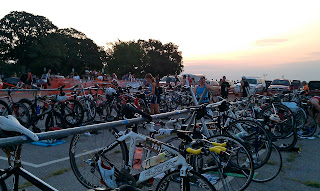 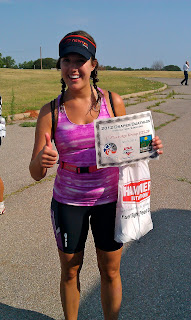 Thankfully, Mother Nature cooperated with light winds.  It was muggy but at least the race started at 7:30am so the temps weren't unbearable.  We rode into the transition zone and once again, I swapped my helmet for the visor, switched shoes and headed for the run course.  I knew the second run would hurt a bit more after working my legs hard for an hour or so but I also knew I only had a few miles until the finish line.  The run course had a few hills but nothing terrible.  I usually try to find someone ahead of me with a similar pace to keep me moving at a good clip.  I like to push it towards the finish line.  A few people cheered my name and it really gave me what I needed to fly across the finish.  If you ever want to volunteer for a race, you should do it!  The cheering and encouragement helps by leaps and bounds! 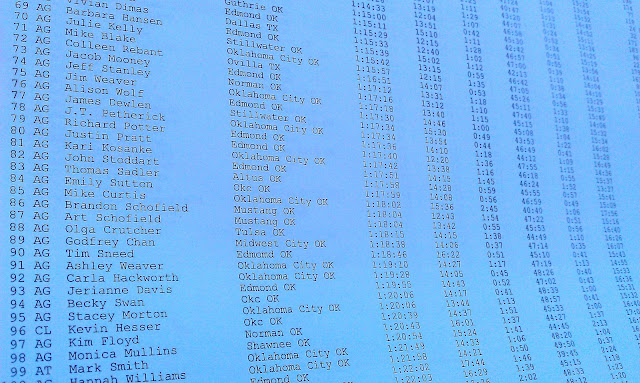 This time I did not feel like I was having a heart attack but I did push hard through the finish line.  I ended up with a time of 1:17:59. I received 1st in my age group (25-29) but I do not know how many people entered in my age group.  As soon as I figure it out I will let you know!  That is another reason not to turn 30 - you enter one of the toughest age groups!  I have one more year to compete in this division.

After cheering others on and getting something to eat and drink I put my bike in my trunk and locked my car...with the keys in it! Idiot!  Thank goodness by buddy, Joleen Chaney came to my rescue with my set of spare keys.  Note to self, always keep the car doors unlocked when you are putting your bike away!

All in all it was a great experience.  I think I will do the DU again one day.  My next race is COLOR ME RAD tomorrow morning.  It's going to get messy in a good way.  Stay tuned for the post and have a great weekend, friends!
Posted by emilyrsutton at 3:56 PM 1 comment: 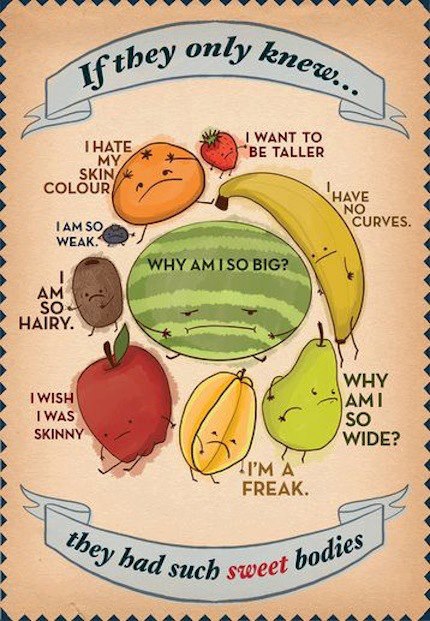 Posted by emilyrsutton at 2:14 PM No comments:

Hello, friends! Hope you had a fabulous 4th of July!  As you may recall from previous posts, Joleen and I teamed up again for a great cause.  The local chapter of the American Diabetes Association asked "Team Jo&Em" to be "celebrity" riders for the Tour de Cure this year.  We spent about 6 months recruiting team mates, raising money and training.

Joleen and I actually had to work the night before the Tour de Cure so we did not get an ideal amount of sleep.  Thankfully, this isn't a race...it's a ride. In other words, you can take it at whatever pace you'd like.  The prize is raising money for a great cause!  There were 4 different ride distances to choose from: 62, 48, 30, or 10 miles.  I did the 48 mile and Joleen decided to do the 30.

The 48 mile riders started at 8am.  The weather cooperated with sunny skies and light winds.  I could tell it was going to get really hot really fast.  We passed the first water stop and rolled up on the second one about 20 miles in.  They served "fancy water" as I like to call it - with cucumbers or oranges, etc in the water.  We also ate pineapple on a stick! Very innovative and delicious!  However, it's the paper towels I looked forward to the most.  Note to self, never put sunscreen on your forehead when you are going to sweat a lot.  It will drip into your eyeballs and hurt!

We journeyed on encountering a surprising amount of hills.  I don't mind a row of steep hills but the slow, steady inclines are rough.  I went from an average of 16 mph to 10 on those long hills.  My riding buddy, Johnny Mac helped push me through it.

Totally forgot that you can draft in cycling events!  In triathlons, you have to leave a 3-bike distance between you and the cyclist ahead of you or else you will get a time penalty.  What is drafting?  It's where you ride up really close to the cyclist in front of you so they take the brunt of the wind and you trail behind them with ease.  According to this study, you can save up to 40% of your energy in a drafting group versus riding into the wind solo.  It's a pretty good deal...unless you are in front! 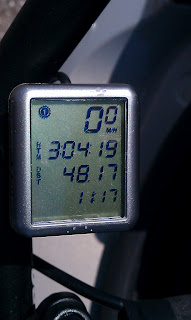 The Heat is On

We finished in about 3 hours...crossing the finish line at 11am.  YIKES...it was already well into the upper 80s with a heat index in the low to mid 90s.  Thankfully the event provided plenty of water and cold, wet towels.

All in all it was fantastic experience.  I should have a trained a bit more but I survived!  I dare say that love cycling!  Although, like other sports, it's a love-hate relationship.

I dedicated this ride to my Aunt Louise on my dad's side.  She's lived with Type I Diabetes for nearly her entire life. She has to watch what she eats and take insulin shots regularly.  She's a trooper!  Thank you to all who donated an our fabulous teammates!  We raised exactly $1,000 for the American Diabetes Association.

Came Across This Cool Pic... 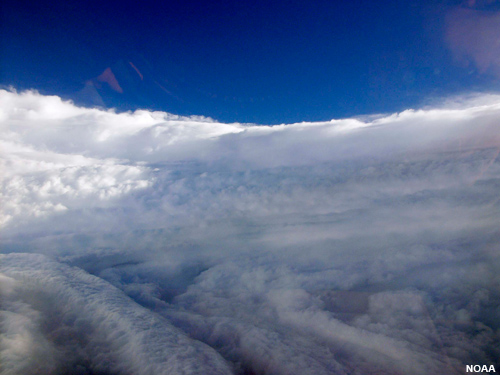 This is a picture taken from the inside of Hurricane Katrina's eye. The clouds you are looking at were responsible for $81 Billion of damage and the loss of nearly 1,500 lives. Incredible what Mother Nature can do.
Posted by emilyrsutton at 11:08 PM No comments: