Longest Workout Ever & My First Crash!

Let's face it. I've slacked on this blog but it's time to catch up and prepare for a new year of adventures. 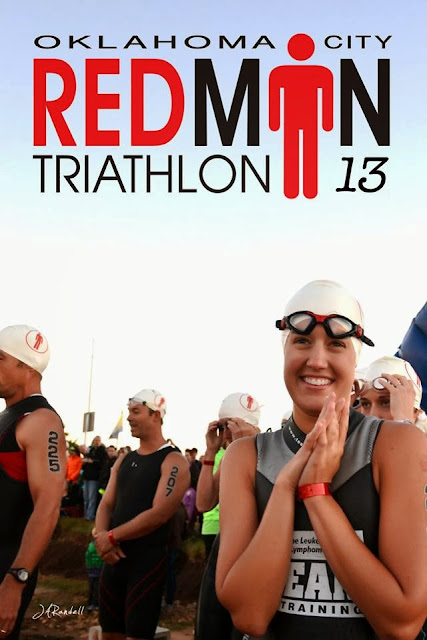 On September 21, 2013 I crossed the finish line of my first full aquabike. 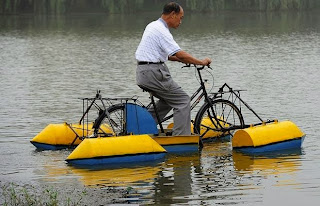 No, the aquabike is not a bike that rides on water.  It's a full Ironman minus the worst part - the run.  So it's a 2.4 mile swim and a 112 mile bike. I wanted to try it for a new challenge and to help me mentally wrap my head around a full Ironman and see if I stood a chance. 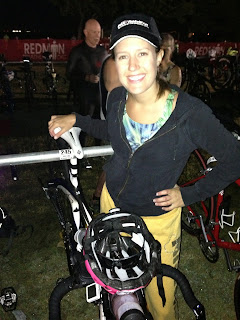 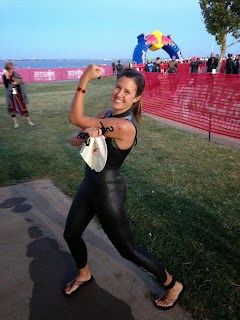 Once again I had the honor of singing the National Anthem before the race. This time I made sure not to run to the start after singing and fog up my goggles.  You couldn't ask for better weather. The winds were calm we had sunny skies and the temps were in the 50's.


Unlike previous years, I didn't have any pressure. This race was about just about finishing a new, monster distance and not about getting a certain time.  Since we had a wet spring, the water levels were actually high for the first time since I've been in Oklahoma.  This allowed for the "normal" swim of paralleling the shore instead of a pyramid swim out in the middle of Lake Hefner.  I prefer the out and back swim over a parallel swim.  It makes it easier to sight. 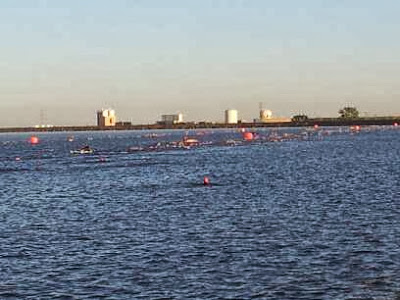 I felt comfortable on the swim. I hadn't worn my wet suit all summer long and forgot how much they help you float. Bonus!  After the first quarter of a mile, I got my rhythm.  This year I didn't get kicked in the face! Down and back around the buoys is 1.2 miles. I had to do 2 loops. After the first turn I thought, "wow, this is going to be a LONG swim!" I'd been training with 1 hour swims and knew the swim would take about an hour and a half but DANG that swim felt like forever! I just kept playing new songs in my head and focusing on reaching and gliding with my strokes.  Before I knew it, coach Ryan was helping me climb out of the water!  It's a bit dizzying climbing out of the water after you've been swimming horizontally for an hour and a half!  I jokingly told coach, "just call me the Diana Nyad of Lake Hefner!" 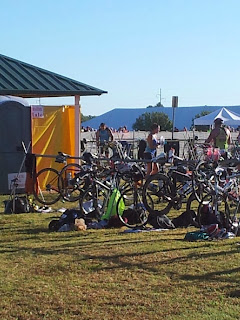 After being stripped of my wetsuit, I dropped it off at transition and ran to the changing tent.  For a full Ironman, you have the option of changing into bike shorts and dry clothes for the run. For 112 miles on the bike, I opted YES to change into bike shorts. Bike shorts have more padding than tri shorts and helped save me from enormous pain in the derriere! 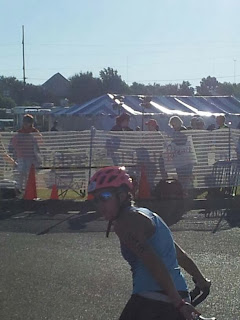 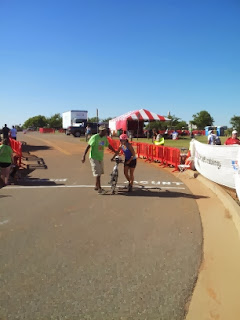 I started out the bike making sure not to get caught up in the race energy and ride fast early on.  I tried to set a pace around 16-18 mph and made sure to always take in water, gatorade and gummies.  The day before the race, coach Ryan told me to pack a PB&J in my "special needs bag." The special needs bag is also an option for full aquabike and full ironman participants.  About half way through the bike, there is a special stop where you can access your bag full of whatever goodies you'd like to pack (your fave nutrition bars, gatorade, chamois butt'r, etc.).

I felt pretty good on the bike and had a different mentality than when I did my half Ironman distances.  For the half Ironman, I could break the bike up into miles/segments to get through the ride.  For the full aquabike, I just accepted the fact that my rear would be parked on a bike all dang day and that's that.  I knew my biggest issues would be shoulder pain from being in the aero position (hands on the aerobars and flat back) and my hoo-ha (can I say that? Just did.) hurting from the bike seat.  Coach Ryan gave me the great advice to keep my head down but lift my eyes up to look ahead. I think this spared me shoulder pain until mile 60 instead of mile 30 like previous training rides. 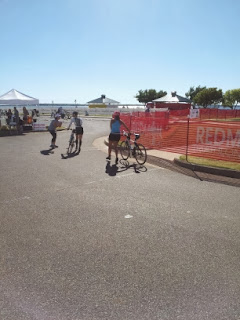 I rode without stopping for the 65 miles or so. I stopped at the special needs bag station, stretched and ate my coveted PB&J. Who knew that a dang sandwich could be such a motivator? That's all I wanted from mile 40 on.  A wonderful volunteer at the aid stop agreed to give me a shoulder rub. GOD BLESS YOU!  I slapped on more chamois butt'r, put nuun in my water and headed on my way for the second lap.

Laps suck.  Laps make you realize just HOW MUCH further you have to go. Then again, I had already mentally surrendered to the fact that I would be out there all day. During the first lap you are surrounded by cyclists as half Ironman racers are still around.  During the second lap, they are out running so it's just the "fullers" left...and it gets lonely. I would see another cyclist every 30 minutes or so.  I didn't mentally hit a wall like in past long rides but I did have ups and downs. During the downs I slowed my pace and focused on my pain. On the ups I sped up and had positive thoughts.  By the time I reached mile 80, I felt deserted and delirious.  I started singing songs out loud by mile 90. 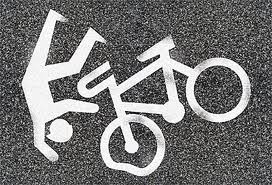 Around mile 100 I actually saw a few other cyclists! I struck up a conversation with 2 other female cyclists.  In triathlon, it is illegal to ride near another cyclist. You are supposed to leave 3 bike lengths between you and the person in front of you, otherwise you get a penalty.  This is to prevent "drafting" since triathlon is an individual sport.  Well, at mile 100 I didn't give a crap. I was in pain, bored and needed a distraction, so I spoke to the other ladies. They were both doing the full ironman. It was a first for one and a 10th or 11th for the other one.  The newbie looked down to get something from her nutrition bag and hit a cone blocking off the lane for cyclists on Council road.  This started a chain reaction and her fall knocked me down.  It all happened so fast.  Her front wheel hit my wheel and I fell to my right hitting my right shoulder on the curb and my head hit the grass.  Thank GOD I was wearing a helmet!  In shock, I unclipped out of my pedals and sat up.  Yeah, it's girly but I started crying. Not because I hurt but because I worked to hard all day for THIS to happen at mile 104. Seriously.  I was so exhausted I wanted to quit right there. But the other girls were going to finish so I would too.  I knew something was wrong with my right arm.  It couldn't have broken but I couldn't turn my wrist.  It hurt so much that I couldn't change gears with my right hand.  I rode and cried all the way to the finish. I stopped crying before I finished because I didn't want my boyfriend to see I hurt myself.

All in all, I was happy with my time considering I slacked with my training. I was happy that I made it through the entire race...including a crash! 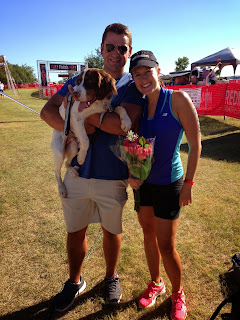 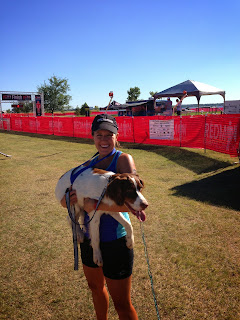 I gave Michael a big hug. He brought my baby boy OKIE with him!  I didn't tell him about the crash because I knew he would be concerned and that would make me cry again and I didn't want to be crying for my final photo.  So I racked my bike, put on my shoes and wobbly made my way to the finish line for a final photo.  After receiving my finisher's medal, I took a few pictures with Michael and then told him about the crash.  After visiting the medical tent, the doctors concluded I did not break anything but likely had a sprain.

Oh wow the next day I was stiff!  I could not lift my right arm past my shoulder for 3 days. Michael had to put my hair in a pony tail for me. I had a huge bruise and scrape on my right shoulder and elbow and had a terrible burn on my lower back due to my shirt coming up on the ride. This is called a "fishtail" burn in the cycle world.  Surprisingly, my legs weren't terribly sore a few days later.  Although I did not break my arm, that injury was ANNOYING. I couldn't turn unlock a door or start the ignition without immense pain. I went to a sports medicine doctor and found out I had a bad sprain.  He said it could have been WAY worse and if I used my hand to stop the fall I likely would have shattered my elbow.  I couldn't ride a bike or swim for months so I ran for exercise. Thankfully, everything is fine now. Yes, I am a wuss and get very dramatic when it comes to injury. 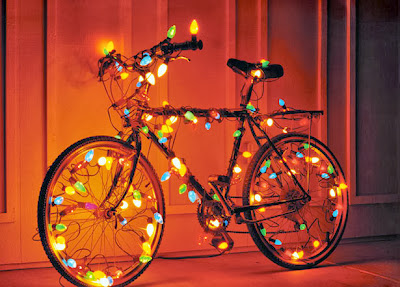 I think that's a lot of writing for now...stay tuned for more on the HUGE endeavor I'm taking on with 11 other Oklahomans next year. Have a Merry Christmas and a Happy New Year!
Posted by emilyrsutton at 10:31 PM No comments: